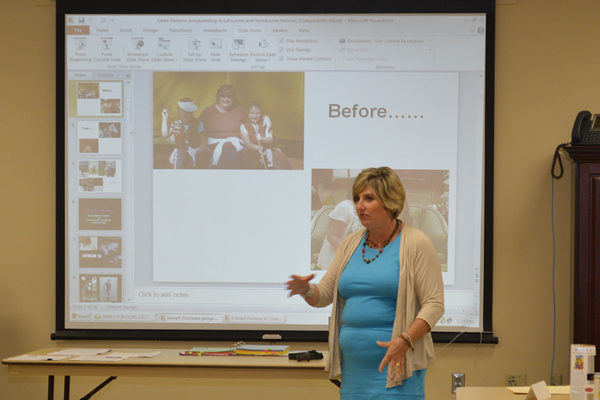 Lynette Callahan, a graduate of the Smart Portions program, speaks to the current class about how Smart Portions has helped her lose weight, reduce her need for medications and develop a love for exercise. Photo by Tobie Blanchard (Click on image to go to downloadable version.) 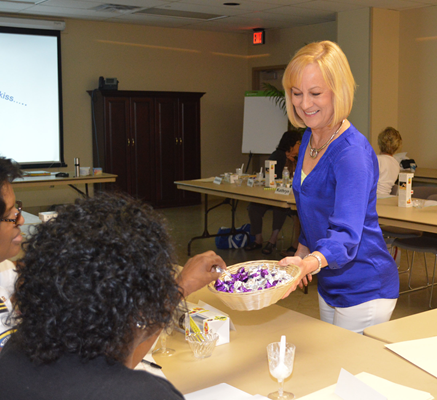 Debbie Melvin passes out Hershey kisses to participants of her Smart Portions class. The class was doing an exercise on savoring food. In the eight-week session she teaches people how to make sensible food choices and healthy lifestyle habits. Photo by Tobie Blanchard (Click on image to go to downloadable version.)

THIBODAUX, La. – Debbie Melvin likes to say that it takes 30 days to make something a habit. She spends eight Monday evenings with a group of women helping them form healthy habits they can have for the rest of their lives.

She also spends three mornings a week exercising with her Strong Women group.

Melvin, an LSU AgCenter nutrition agent in Lafourche and Terrebonne parishes, has been teaching Smart Portions classes for five years and doing Strong Women for six.

The eight-week Smart Portions program arms participants with knowledge necessary to make positive lifestyle changes that can lead to a healthy weight.

But Melvin doesn’t want her clients obsessed with the number on the scale or the amount of calories they consume.

“My aim for them is not focusing on those numbers. It’s preventing them from getting chronic diseases,” Melvin said.

“There is a huge segment that we think we can keep out of the hospital for a long part of their life, if we can get them to a healthy state. And maintaining nutrition is obviously critical with built-in exercise, too,” said Brenda Hansen, Education and Training Director at Thibodaux Regional.

Lynette Callahan went through the program in 2009. She has gone from taking five different medications for issues such as high blood pressure and cholesterol to needing only one.

She described herself as a person who ate everything Sunday night, then started a new diet Monday morning. She would lose some weight, but said she always gained back more. Smart Portions ended that cycle for her.

Callahan said Smart Portions also encouraged her to start an exercise routine. She said she started going for short walks, then jogs. Now she competes in triathlons and half marathons.

Mary Strickland began the program in the 2010. She had seen how diabetes had ravaged her mother’s legs, causing her to lose several toes, and swore her own children would never see her like that. She said the day she started Smart Portions was the day her life changed.

Strickland has lost 125 pounds using what she has learned through Smart Portions.

The program includes lessons such as proper portion sizes, strategies to prevent overeating, tips for breaking bad habits, smart choices when eating out and healthful foods that will keep you feeling full longer.

Melvin said many restrictive fad diets create an adversarial relationship with food. She wants that relationship to be positive.

“That’s not freedom. That’s not living to me. I want them to live a full life,” she said.

Participants in the program keep food journals, which Melvin reviews. Volunteers Mary Delaune and Debbie Robichaux weigh in participants each session, which Melvin doesn’t want to see. She’d rather observe their progress in their individual folders. The volunteers also serve healthy recipes Melvin prepares for clients to taste during the classes.

Cheryl Boudreaux said she joined because she was tired of being overweight and limiting herself in what she can do.

“I think I have a lot of good years left in me, and I want to continue to be active and enjoy my grandchildren,” Boudreaux said.

Melvin practices what she preaches with her Strong Women group. The women meet three mornings a week at a recreation center in Thibodaux.

Melvin was trained as one of the national program’s community leaders. The program aims to help women improve muscle mass, bone density and overall function as they age.

“There are people with osteoporosis, osteopenia. There are people who have had accidents, broken ankles, broken legs, and yet their doctors have told them they’ve come back strong because they began strong,” Melvin said.

Faye Blanchard agrees. She lives about 40 minutes from Thibodaux, but drives in the three days a week just for the class.

“The group keeps me motivated to keep moving. I could probably do the same routine at home. I have all the weights. But you just get involved with doing things at home, and you don’t make time to do it.” Blanchard said.

The classes are taught by Monica Stock, a chatty exercise enthusiast who gets the women talking while they work out.

“We share with each other. We enjoy our time together,” Stock said. “That is as much a benefit to their health as the exercises are.”

Many of the women in the group are over 70 and are active gardeners, enjoying fishing and other activities. Being a part of the Strong Women increases their agility and helps them enjoy a better quality of life.

Melvin has seen people make drastic improvements in their lives, from losing weight, getting off medications and starting and sticking to exercise regimens. She has done pre- and post-tests with participants and before and after body fat analyses, but she said that is not how she rates success.

“I don’t know how to measure success except if I can get them to change one habit, that’s success.”