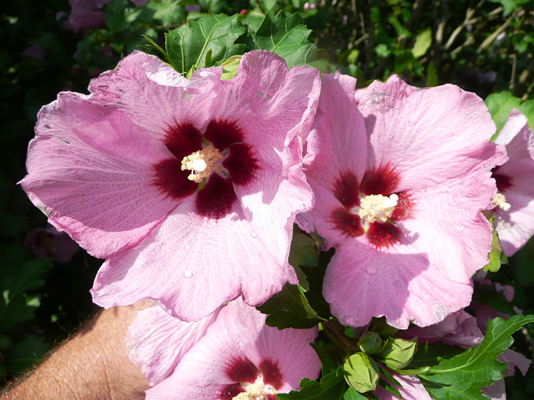 Flowers of Aphrodite althea up close. (Photo by Allen Owings. Click on photo for downloadable image; right click to save.) 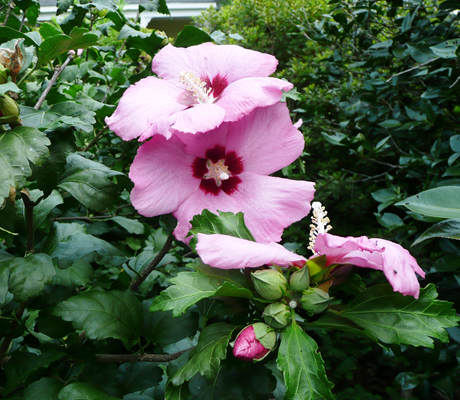 Flowers of Aphrodite althea will bloom throughout the summer. (Photo by Allen Owings. Click on photo for downloadable image; right click to save.)

HAMMOND, La. – Althea goes by the scientific name of Hibiscus syriacus. When they look at althea, most gardeners are reminded of the hibiscus family, to which this popular, Southern heritage plant belongs. These plants are also known as rose of Sharon.

Altheas are native to Asia and were widely used in Europe prior to being brought to the American colonies in the 1700s. They have long been considered durable landscape shrubs.

Althea can be used as an attractive, deciduous hedge or as single blooming specimen plant. They reach heights of 10 feet and are outstanding bloomers from late spring to early fall. Flowers are very attractive and come in shades of white, pink, red, lavender and purple. And the flowers are edible, too.

The U.S. Department of Agriculture had a major breeding program with althea in the 1970s and 1980s. Aphrodite is a USDA variety release from 1988 and is a Louisiana Super Plant for this spring. The variety has clear pink, heavily ruffled petals. And a prominent, dark red eye spot radiates along the veins to the mid-petal.

Aphrodite was chosen as a Louisiana Super plant because of the larger-than-normal flowers and the long blooming period – from early May through Labor Day. Peak flowering performance is longer and the quality of flowers is better than other popular varieties. Plants are sterile – they don’t produce seed – which allows for a long flowering time.

Plants grow erect and do well in a variety of soil types. But they do best in a sandy loam with a pH of 5.5-7.0. Flowering is heavier and growth is more compact when the plants have eight hours of direct sun daily. Shading from nearby plants will produce a taller plant, but slightly less sun is acceptable for a long-term location.

Pruning is recommended for late winter because blooms will only appear on new growth. Flowers will only last a single day; however, they are quickly replaced. Soil moisture is important to ensure constant blooming, so mulch your althea and provide regular watering during dry summer periods. Fertilize annually in spring after new foliage growth commences.

You can see more about work being done in landscape horticulture by viewing the LSU AgCenter Hammond Research Station website at www.lsuagcenter.com/hammond. Also, like us on Facebook by going to www.facebook.com and typing Hammond Research Station in the search box. You can find an abundance of landscape information for both home gardeners and industry professionals.