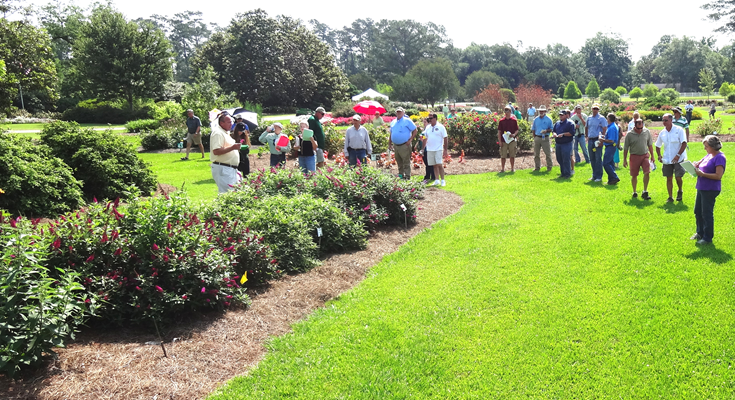 Nursery and landscape professionals tour the sun garden at the AgCenter Hammond Research Station during a field day in May. (Photo by Allen Owings. Click on photo for downloadable image; right click to save.)

The 140-acre facility operated by the LSU AgCenter has been in existence since 1922 and eight years ago began focusing on landscape horticulture.

Now home to the LSU AgCenter Landscape Horticulture Research and Extension Center, the station for many years was dedicated to fruit and vegetable research. Some work with ornamental plants occurred at the station from the 1950s until early 1990s. Now, under the direction of resident coordinator Regina Bracy, the station is working on a master plan based on recommendations from a horticulture industry-based advisory committee.

In addition to program changes, the station also has undergone physical changes during this time. More than 15 acres of landscape beds have been installed for research, and new office and lab facilities were constructed. More than 90 percent of existing infrastructure – including greenhouses, irrigation and water systems, roads and storage buildings – has been renovated.

In a few years, the station has become a dynamic site for landscape horticulture research and extension programs. All of this, remarkably, has been done in stressful budget times for the LSU AgCenter. The support of many grants, Tangipahoa Parish government leaders and industry representatives has led to the station’s transformation.

One of the main research areas at the station is simply called the “sun garden.” Imagine 48 well-constructed raised landscape beds complete with irrigation laid out in a landscape-friendly design. Beds average about 500-750 square feet each. This area is used for evaluation of cool-season annual flowers, warm-season annual flowers, herbaceous perennials, seasonal tropicals, roses, companion trees and shrubs, ornamental grasses and more.

The station evaluates more than 850 varieties of ornamental plants each year, and plants are added and removed from the sun garden monthly throughout the year as new studies begin and older studies conclude.

Woody ornamental shrubs and trees in the garden change out less often. They include plants such as new landscape material from the Southern Living plant program, new varieties of photinia with claimed disease resistance, dahoon hollies, Hot Flash camellias, Frostproof and other varieties of gardenias, vitex, loropetalums, several new varieties of Indian hawthorn and more.

Although the sun garden is not officially an All-America Selections (AAS) location, many of the newest and most tried-and-true AAS winners are planted in observational studies in the sun garden each year. These plants include the recent winners Summer Jewel Red salvia, Mesa gaillardia and Glamour Red kale.

Many visitors, from Master Gardeners to garden club members to retail garden center owners and managers to professional landscapers, visit the sun garden at the Hammond Research Station each year. Tours are provided to many groups throughout the year, and visitors at field days and open houses even get to vote (early and often – you know we are in Louisiana) for their favorite plants. These plants are then designated as People’s Choice winners. This is a great way for us to see what different audiences prefer in the way of landscape plants.