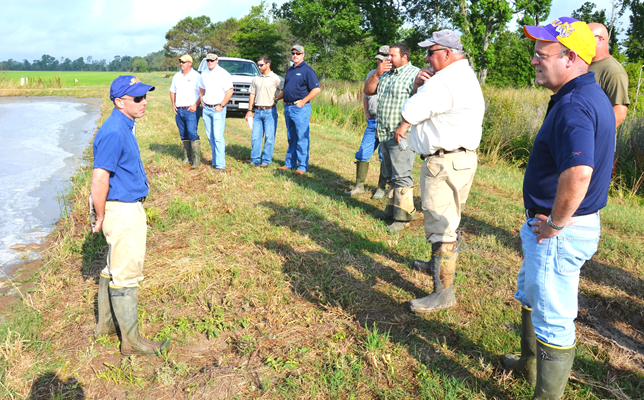 At the Evangeline Parish rice field tour, LSU AgCenter agronomist Dustin Harrell, far left, explains his project to test responses of rice plants to various nutrients in a nutrient-deficient field at a research plot near Mamou. (Photo by Bruce Schultz. Click on photo for downloadable image; right click to save.)

MAMOU, La. – LSU AgCenter rice experts speaking at the Evangeline Parish Rice Tour on May 23 said this year’s rice crop so far has been unusual and difficult.

“This is probably the most unique and challenging year in my career,” said Steve Linscombe, LSU AgCenter rice breeder and director of the Rice Research Station.

Three off-station breeding plots were hit with herbicide drift, and another was ravaged by birds that ate the seed, Linscombe said.

The drift that affected the plots near Mamou was a small amount of chemical that would not have been noticed during a normal year. But Linscombe said it probably was detected this year because the rice is growing so slowly.

Cool weather has held the crop back from growing normally, Saichuk said.

Saichuk said he doesn’t know if the cool weather and slow growth will affect yield. The rice needs a dry June without unusually high temperatures.

But blast disease that devastated many fields last year has not yet been found. By this time last year, Saichuk said, farmers were finding blast.

LSU AgCenter plant pathologist Don Groth said signs so far indicate blast will not be as widespread as it was in 2012.

It’s too early for sheath blight to be causing a problem, he said. The fungicide Sercadis has been approved for fungicide-resistant sheath blight wherever resistance is found.

To reduce disease problems, Groth advised farmers to get their fields flooded as soon as possible and avoid using too much fertilizer.

LSU AgCenter entomologist Mike Stout said farmers shouldn’t relax their guard against rice water weevils. “Don’t take it for granted that because we’ve had a cool spring, we’ll have a mild weevil problem.”

The insects are showing up on schedule, but insecticides such as Nipsit INSIDE are available to control the pest, Stout said.

LSU AgCenter agronomist Dustin Harrell showed research plots that had been treated with different nutrients in nutrient-deficient soils. Even plots that received sulphur responded well. The trials will also evaluate the fertilizer response of the nutrients in the second rice crop.

LSU AgCenter weed scientist Eric Webster said he has looked at numerous fields that have been affected by herbicide drift. Farmers who suspect their fields were hit with drift should get verification from LSU AgCenter personnel and testing by the South Dakota Agricultural Laboratories for analyses.

Also, he said, a Clearfield Jazzman line is being grown now in Puerto Rico for a seed increase. Linscombe said farmers will grow approximately 25,000 acres of Jazzman-2 this year.