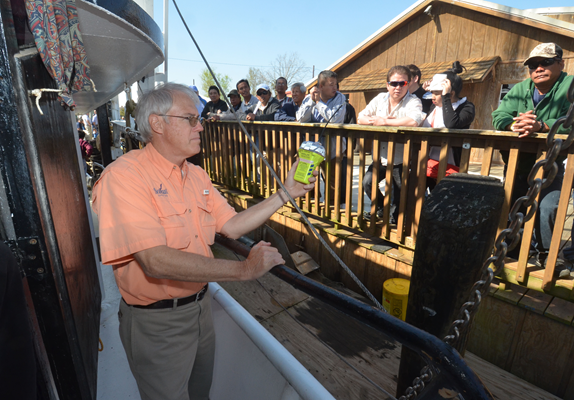 Mark Shirley, LSU AgCenter fisheries agent, shows shrimpers in Delcambre how to use an Emergency Position Indicator Radio Beacon to alert the U.S. Coast Guard with a distress signal. (Photo by Bruce Schultz. Click on image for downloadable version.) 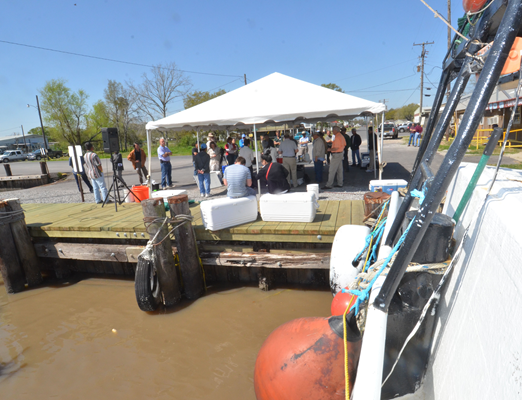 Shrimpers in the Vermilion Bay area attended a dockside workshop on March 5 to hear about ways to make their operations more efficient. The event, organized by the LSU AgCenter and Louisiana Sea Grant, is one of a series being held across the Louisiana coast. The next session is set for April 9 in Cameron. (Photo by Bruce Schultz. Click on image for downloadable version.)

“We are talking about efficiency and quality,” said Thomas Hymel, AgCenter and Sea Grant extension agent. “The challenge the Louisiana shrimping industry has is to bring in a quality product competitive with imports.”

Hymel said the state’s shrimping business has lost significant numbers. “The folks out there now are the survivors.”

Hymel told shrimpers of the different ways to improve fuel efficiency. “The biggest thing we can do is slow that boat down.”

He said fuel flow meters help find a boat’s optimum speed and fuel consumption, and a well-maintained diesel engine burns half the fuel of a poorly tuned engine.

A representative of the National Oceanic and Atmospheric Administration urged shrimpers to comply with regulations requiring trawls to have turtle excluder devices (TEDs).

“It’s important now more than ever that you have your TEDs legal by every measure of the law,” said Dale Stevens of NOAA.

He said a lawsuit filed by three environmental groups against NOAA has been settled with an agreement that more boat inspections will be conducted to make sure regulations for TEDs are being followed. If shrimpers have a compliance rate less than 88 percent, areas of the Gulf of Mexico will be closed to shrimping, Stevens said.

He said inspections last week of boats at Intracoastal City showed most shrimpers are following the regulations but improvements are still needed.

Shrimpers saw a demonstration of the use of an Electronic Position Indicating Radio Beacon that sends a signal to the Coast Guard to activate a search-and-rescue operation. The EPIRB is activated by the push of a button or when it hits the water and sends a signal to Coast Guard with the precise location where the signal was transmitted.

As an alternative, mariners can use an emergency switch on VHF radio connected to a GPS unit that sends a distress call to boaters monitoring their radios.

The meeting was one of a series being held across the state. The day after the Delcambre gathering, shrimpers met in Venice to get similar information. A prior meeting was held in Houma.

The next session will be April 9 at the Cameron Multi-Purpose Building, 122 Recreation Center Lane, behind the Cameron Parish Courthouse. Topics will include the Louisiana Direct and Cameron Direct Seafood marketing program, an update on the Cameron fisheries processing project, the Louisiana Wild Seafood Certification Program, onboard shrimp handling, slush ice and brine freezing demonstrations.