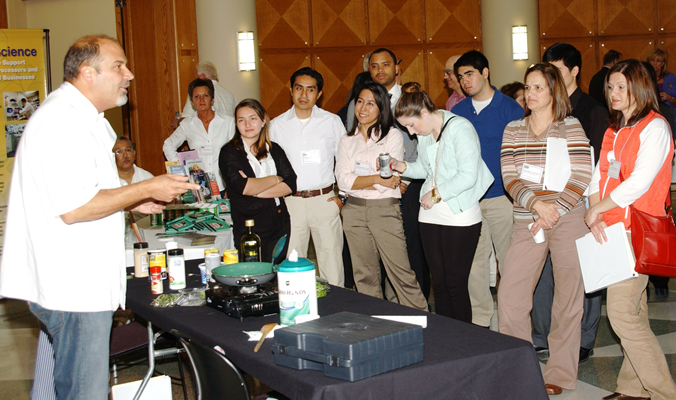 Ingredient substitutions can increase the healthfulness of prepared dishes, said Neil “Nino” Thibodaux (left) at the 2013 Louisiana Food Processor Conference on March 13. Thibodaux, who conducts culinary classes in Houma, conducted a cooking demonstration focusing on “Changing Louisiana – One Ingredient at a Time.” (Photo by Rick Bogren. Click on photo for downloadable image.) 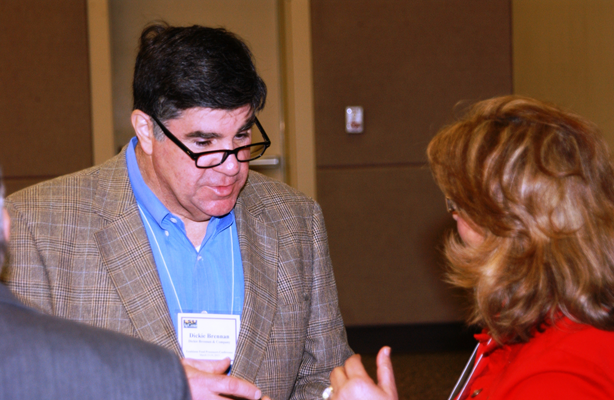 BATON ROUGE, La. – Sometimes calories aren’t the same. They’re a measure of energy in foods, but calories in some foods are more easily transferred into the body than calories in other foods, said Richard Mattes, professor of foods and nutrition at Purdue University.

Mattes was the lead speaker at the 2013 Louisiana Food Processor Conference held March 13-14 on the LSU Campus.

Energy value is at the heart of food, Mattes said. We don’t consume calories; we consume energy. And bodies work on energy, not the quantity of food that’s eaten.

Mattes gave nuts as an example. If nuts are soft and well chewed, the body will absorb much of the energy. If the nuts are hard and not as thoroughly chewed, however, a portion of the calories will remain in undigested nuts and pass through the body.

The energy value of food depends on how it is digested, he said. “You have to view foods in the totality of the diet.”

People also perceive value in some foods for their health or medicinal value, she said. Trust and transparency are key issues.

“All health recommendations now are obesity driven,” Rowe said. But consumers see science as revolutionary rather than as evolutionary; they don’t always comprehend how scientific findings change as new information emerges from research.

“Information is not education,” she said. You have to know your destination in order to use the “map” when it comes to nutrition labeling.

Regarding food consumption out of the home, New Orleans restaurateur Dickie Brennan expressed frustration at the absence of more locally produced foods.

While acknowledging that Louisiana agriculture is commodity based, Brennan suggested the marketplace has room for “boutique” farms that work with restaurants and other local outlets to provide locally produced fresh fruits, vegetables and meat products.

Brennan explained how he and others in the greater New Orleans area are working with the LSU AgCenter to develop processing plants to develop local agriculture.

He likened the potential of Louisiana production to areas of Europe where producers and processors develop products such as cheeses that reflect their local areas in terms of flavor and contents.

“It’s happening here in the states,” he said. “There are entrepreneurs who can produce a specialty product – cheese, duck whatever.”

“Getting it from the farm to the table is economic development,” Brennan said.

“The culture we have can only be supported by the ‘food ways’ this culture has,” Besh said, referring to the path products follow from the farm to the table. “It doesn’t just happen.”

Besh related his experiences working as a chef in Germany and learning about local fish, produce, dairy products and veal.

“I just call it responsibility to do all we can locally,” he said. At some point, consumers are willing to pay more if the products are produced responsibly and sustainably.

Agriculture in Louisiana is important, said Dr. Mike Strain, commissioner of the Louisiana Department of Agriculture and Forestry.

“This is a food state; this is an agricultural state,” Strain said. “We’re pushing fresh and local.”

Strain said population growth means producers and processors need to increase “food on the table” by 30 percent in the next eight years. That means improving harvesting and processing.

“Food processing is a huge part of the solution,” Strain said.

An important part of food processing is ensuring food safety, said Mike Moody, associate director of research and development for the National Center for Biomedical Research and Training in Baton Rouge.

“Compliance requires training,” he said. “If you’re not getting food safety training, you’re really behind the curve.”

Moody said his agency, a division of the federal Department of Homeland Security, provides training courses to help food processors meet the requirements of federal regulations.

“People eat diets, not food,” said LSU AgCenter food scientist John Finley. “We must consider everything people eat, not one food or one meal.”

From research to commercialization, research needs to consider foods’ benefits beyond basic nutrition.

To help aspiring entrepreneurs bring their food ideas to market, the AgCenter has launched a food business incubator in Baton Rouge.

Slated to open in June, the incubator already has 20 companies on board, said incubator coordinator Gaye Sandoz.

“It’s designed to help people bring their ideas from recipe to the marketplace,” Sandoz said.

The incubator will include a commercial kitchen, a demonstration kitchen and pilot plant, Finley said. It will offer not only new companies but any food processors access to shelf-life studies and microbiological studies.

“The incubator has the food science department behind it,” Finley said.

J.H. Campbell Jr., president of Associated Grocers in Baton Rouge, talked about what the consumer is facing today.

The challenge is to “create loyalty with reliability and predictability,” Campbell said. Products have to meet consumer expectations and meet them with consistency.