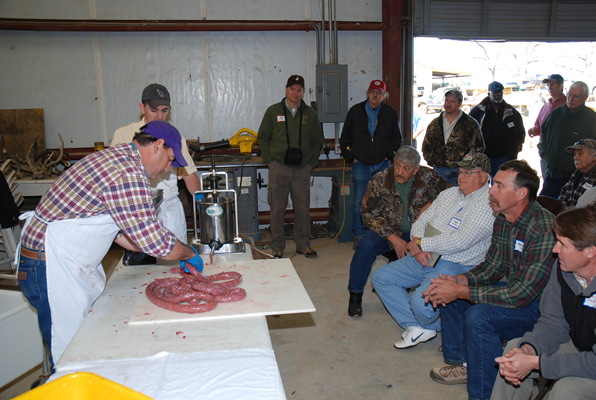 Chad Kelly from the Ultimate Outdoor Store demonstrates how his leg-hold snares work in trapping feral hogs at the LSU AgCenter wildlife field day at the Bob R. Jones-Idlewild Research Station near Clinton on March 16. (Photo by Johnny Morgan) 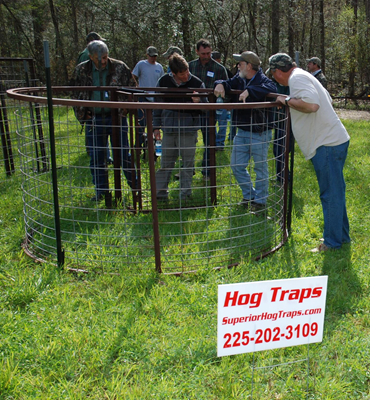 CLINTON, La. – How best to deal with feral hogs and an overview of the epizootic hemorrhagic disease (EHD) problem in white-tailed deer were featured at the LSU AgCenter Wildlife Field Day at the Bob R. Jones-Idlewild Research Station on March 16.

Participants heard how to trap and safely butcher feral pigs and an update on how the EHD virus or bluetongue virus affected Louisiana’s deer herds this past year.

James LaCour, state wildlife veterinarian with Louisiana Department of Wildlife and Fisheries, discussed the EHD problem in the state and proposed changes in the 2013-2014 deer season in Louisiana.

“These viruses are transmitted by little midges (gnats) that transmit the disease from one deer to the other,” LaCour said. “The disease also is spread in saliva, feces and semen.”

EHD is the most common infectious disease of white-tailed deer, with outbreaks occuring almost every year in the Southeast. The disease is caused by either of two closely related viruses – EHD virus or bluetongue virus, LaCour said.

The outbreak experienced this past year is believed to have been caused by the flooded conditions from Hurricane Isaac, LaCour said.

“After the storm, we saw lots of deer pushed up on ridges, and being this close together provided a good opportunity for disease transmission,” LaCour said.

“We actually got lots of good information on the virus and its effects, but unfortunately we had to lose a lot of deer to get it,” Sanders said.

The good news is the disease doesn’t kill every animal that contracts it, Sanders said.

“We assume 100 percent of our adult herd was exposed, and we lost only 20 percent,” Sanders said.

Participants learned about the two most common ways of catching pigs –snare traps and corral traps.

LSU AgCenter wildlife specialist Don Reed said the field day program leaned heavy on feral hogs because the animals continue to be a major pest to landowners and hunters.

“Here on the station, probably the biggest problem we have with hogs is with them rooting up the pastures and causing problems on the land where we cut hay,” Reed said. “They destroy some hay ground to the point that we can’t get equipment in there, and it has to be totally renovated.”

Chad Kelly, from the Ultimate Outdoor Store, demonstrated his leg snare traps and showed how non-target animals like deer, dogs and bear were less likely to suffer major injury with these types of traps compared to other trapping systems.

Jason Harris, owner of Superior Hog Traps, showed how his corral traps could be used with highest success.

Competition for the acorns between hogs competing with native wildlife becomes a problem, Reed said.

LSU AgCenter meat processors Manuel “Boo” Persica and Cole Gregorie demonstrated how to properly process a wild pig to obtain the most from the carcass.

During the demonstration, participants were shown how to properly handle the meat, which included the use of gloves in order to decrease the chance of transmitting any potential disease.

The butchers also showed how to properly grind the meat for different types of sausage products.

Reed said control of the feral hog population is a continuous enterprise and quoted a friend who said, “We’re not going to barbeque our way out of this problem.”

The pigs are good to eat, and this does help in the control effort. But Reed said it will take more than a recreational use of them.

“The Hunters for the Hungry group are now accepting feral hog meat, which is donated to local food banks,” Reed said.

The hunting season has been expanded to day or night from March 1 to the end of August.

Reed also said with a number of stresses being put on the deer herds from hogs competing for food to coyote predation, there is a proposal to lower the antlerless deer harvest in certain areas of the state.

“This would mean that the state is looking at going back to doe days where hunters would only be allowed to take antlerless deer on certain days of the year,” Reed said.