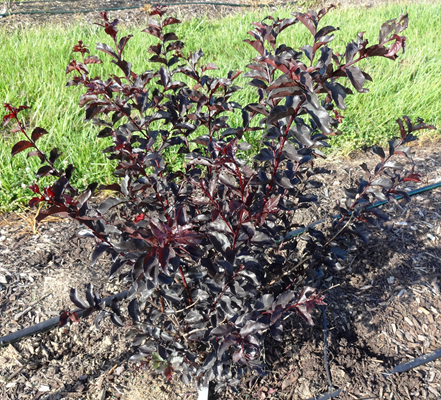 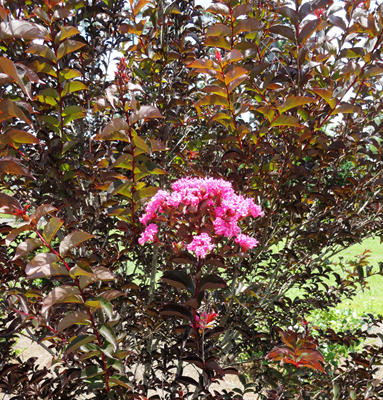 Burgundy foliage and pink blooms of the Delta Jazz crape myrtle. (Photo by Allen Owings. Click on photo for downloadable image; right click to save.)

HAMMOND, La. – The early spring months of March and April were not kind to spring growth on crape myrtles this year. But we are seeing very nice blooms on these great summer-flowering landscape trees as we reach their peak performance time of late June through July.

Crape myrtles need full sun in order to perform their best, grow their best and bloom their best. This means eight hours or more of direct sun daily. Less than eight hours of sunlight daily is not sufficient for ideal performance.

Many of us underestimate the amount of sun our landscape receives. To get a better handle on this, check your sun patterns in the morning, during the middle of the day and again in late afternoon.

Proper soil pH is important for crape myrtles, but maybe not as important as it is for some of our other landscape plants. Crape myrtles like a soil pH of 6.0-6.5. This is considered slightly acid. Do not guess on soil pH – soil test. You can lower the pH level with sulfur products and raise it with lime products. But always do this based on the results of a soil test.

What about pruning? Although February is the time to prune crape myrtles, your particular trees may not need to be pruned. When it is needed, prune these trees to maintain a natural shape. Thin out branches. Do not top or just “hack off the top” of these trees. This is commonly referred to as “crape murder.” We don’t recommend major pruning to reduce height.

Fertilization is important for crape myrtles. This is especially true if you don’t follow some of the other practices and care considerations. To maximize spring growth and summer bloom, crape myrtles should be fertilized in early spring just prior to the start of new growth. A fertilizer like 8-8-8 or 13-13-13 will work fine and is recommended for crape myrtles.

It is best to place fertilizer in drilled holes in the ground (about 8 inches deep) rather than just throw fertilizer on top of the soil. You can fertilize later in the spring and in the summer, but they don’t benefit as much as when fertilizer is applied in late winter to early spring.

Mulching, unfortunately, is done incorrectly in many residential and commercial landscapes these days. Mulch “out” instead of “up.” Many times you may see mulch piled around the base of a tree. Do not do this. Spread mulch outward toward the ends of the branches, and use pine straw, pine bark or wood chips to a depth of 2-3 inches. Refresh the layer of mulch as needed. Keep mulch off the stems and lower trunk.

One frequent problem on crape myrtles is insect damage. Actually, insects generally don’t do much damage to the trees, but aphids feeding on new shoots in spring can be a problem. White flies also may be occasional problems on crape myrtles. Left unchecked, these insects will release their bodily fluids onto the foliage, and the resultant honeydew leads to sooty mold on the leaves. This is the black discoloration that occurs in early summer through fall. If you control the insects, no sooty mold will develop.

Companies have introduced many new groups and varieties of crape myrtles over the past few years. These include the dwarf Razzle Dazzle series, the black-foliaged Black Diamond varieties, the Barnyard Collection (Purple Cow, Pink Pig and Red Rooster), the Enduring Summer series, the burgundy-foliaged Delta Jazz, the Magic series and more. The LSU AgCenter is conducting adaptability studies for south Louisiana on all these new crape myrtles