AgCenter scientists give updates to farmers at field day 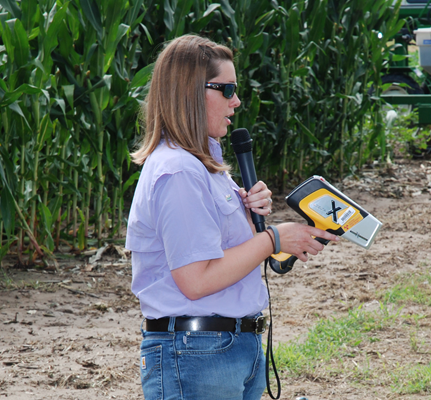 Beatrix Haggard, LSU AgCenter agronomist, demonstrated a scanning device to analyze plant tissue immediately to determine its nutrient needs. She said the price, more than $30,000, means the gadget will be used mainly by consultants and researchers to determine if a plant needs more nutrients. Photo by Johnny Morgan (Click on image to download larger version.) 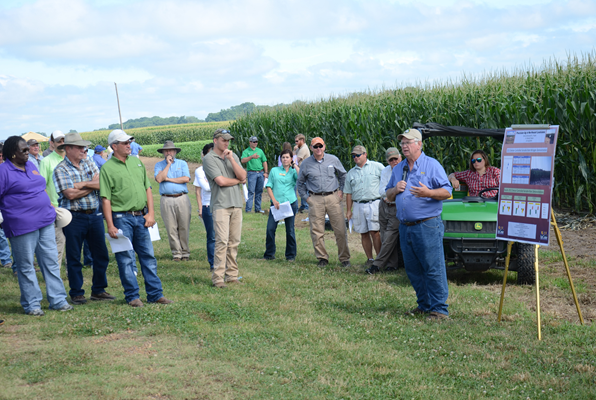 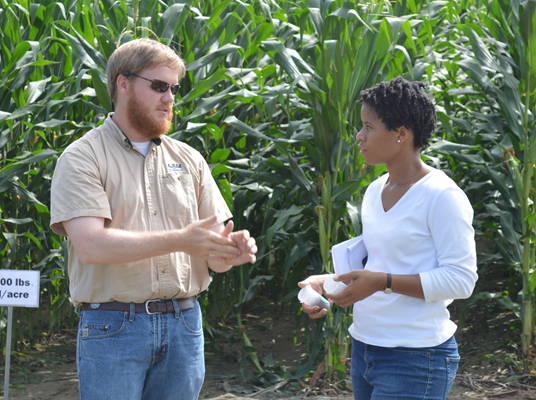 ST. JOSEPH, La. – More than 150 farmers, agriculture consultants and industry representatives heard about the latest research on corn, soybeans, rice and cotton at the annual field day on June 19 at the LSU AgCenter Northeast Research Station.

Donnie Miller, research coordinator at the station and a weed scientist, said a big problem that growers observed this year, with the cooler temperatures that lingered into mid-May, is ryegrass. This weed is glyphosate-resistant and will slowly encroach into a field from ditch banks.

“Ryegrass is not like other resistant weeds, such as Palmer amaranth, that produce millions of seeds,” Miller said. “But, it can still produce around 70,000 seeds per plant.

“There are herbicides that prevent weed emergence such as Dual Magnum, Command and Treflan in the fall. In late winter, Select Max is effective in controlling emerged populations. In the spring, growers can use Paraquat. The best control for emerged plants occurs when applications are made prior to the 6-inch growth stage,” Miller said.

LSU AgCenter weed scientist Jim Griffin explained how using pre-emergent herbicides at planting is helpful in dealing with weeds that have become herbicide-resistant.

“These chemicals are applied to the soil surface, and rainfall moves them into the soil. As the weed seed germinates, it picks up the herbicide, which stops it from growing,” he said.

Griffin said although there are glyphosate-resistant weeds in Louisiana, the situation is still not as bad as in Arkansas, Georgia and Mississippi.

“Part of the reason for this is during the past five or six years, we have been educating growers on the problems of other states and the value of using residual-type herbicides at planting time,” Griffin said.

Josh Lofton, an LSU AgCenter researcher at the Macon Ridge Research Station, is participating in a cooperative study with six other universities across the South to determine the most effective planting dates and maturity group selections for the best soybean yields.

This is the second year of the study, but he wants another year of data to validate his findings, which continue to show maturity groups 4 and 5 are superior in Louisiana.

Rick Mascagni, agronomist at the Northeast Station, discussed the influence of corn hybrids on optimal plant population and yield. His research findings are showing that if there’s more space between the plants, the plants will grow larger ears, if growing conditions are good.

“We’re also looking at how nitrogen needs of the plants are affected by different population numbers,” he said.

He said his plans are to continue the study for two more years to make sure his numbers are true.

A corn disease, Goss’s bacterial wilt, usually found in the upper Midwest, may have migrated to Louisiana, according to Clayton Hollier, LSU AgCenter plant pathologist.

He said tests are being conducted to confirm that the infected samples from a Madison Parish field are Goss’s wilt, but he said he’s 99.9 percent certain that it’s the suspected disease.

He said the disease is seed-borne and moves from plant to plant by wind and water. The disease has the potential to interfere with the development of ears. No treatments are available, but Hollier said it’s unlikely the disease will be a long-term problem in Louisiana because the bacteria will not survive in crop residue.

Corn is being grown all the way south to the Lake Charles area, according to Ron Levy, LSU AgCenter soybean and small grains specialist.

“The weather was ideal for planting corn,” he said, adding that the state probably has more than 600,000 acres planted this year.

Grain sorghum probably totals only 75,000, he said, because of the wet, cool conditions that discouraged planting.

He said soybean planted acreage has probably reached 1.3 million, but he said many farmers have been forced to replant.

“One producer had to replant almost 2,000 acres,” Levy said.

Sebe Brown, LSU AgCenter entomologist, said spider mites are showing up in soybeans. No control exists for the pest, he said, but farmers should be aware of the need to kill weeds before planting.

Brown also cautioned farmers that the use of acephate for stink bugs is limited to 1.5 pounds per acre for an entire growing season.

Brown said two insect pests, the kudzu bug and brown marmorated stink bug, have been found outside Louisiana, and they have the potential to be serious problems here.

David Kerns, LSU AgCenter entomologist, said cotton insect pests are being found early in the season. He said Cruiser seed treatment has lost its long-term effectiveness against thrips, and finding immature thrips on cotton plants indicates the material is not working.

Daniel Stephenson, LSU AgCenter weed scientist, said glyphosate-resistant Palmer amaranth has been found in Catahoula and Avoyelles parishes. “If you find this weed, pull it out of a field, take it to a burn pile and burn it. Don’t leave it in the field.”

Stephenson said the discovery of glyphosate-resistant johnsongrass in Avoyelles Parish is alarming because few options are available to control it.

Haggard showed the participants at the field day the portable X-ray fluorescence spectrometry device, which is normally used in the metal industry but is being used to look at fertility issues in corn and soybeans.

“What we’re doing is looking at how we can get vital information to growers in a matter of minutes that currently can take up to a month,” she said.

The hand-held device uses X-rays to scan plant samples, and the color of the reflected light indicates the amount of the elements being analyzed, she said.

She said the price, more than $30,000, means the gadget will be used mainly by consultants and researchers to determine if a plant needs more nutrients.

Dennis Burns, county agent in Tensas Parish, and R.L. Frazier, county agent in Madison Parish, talked about the use of sensor devices to analyze a crop’s nitrogen needs and make customized applications. The project is expanding to farmers’ fields.

“We are willing to travel if you want to look at how this works on your farm,” Frazier said.

James Hendrix, LSU AgCenter watershed agent, said different tillage scenarios are being tested to determine the different effects on soil. He said runoff from an inch of rain can remove 1,100 pounds of soil. J Stevens, LSU AgCenter soils specialist, said he is sampling soil and water in the project.

In addition, Dr. Mike Strain, Louisiana agriculture commissioner, and Rep. Andy Anders, told the field day participants that they were there to answer questions and listen to farmer concerns.