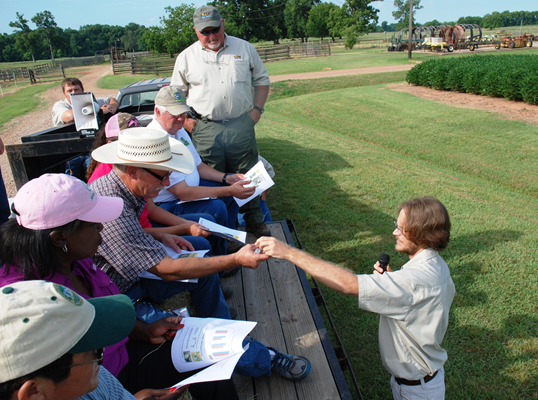 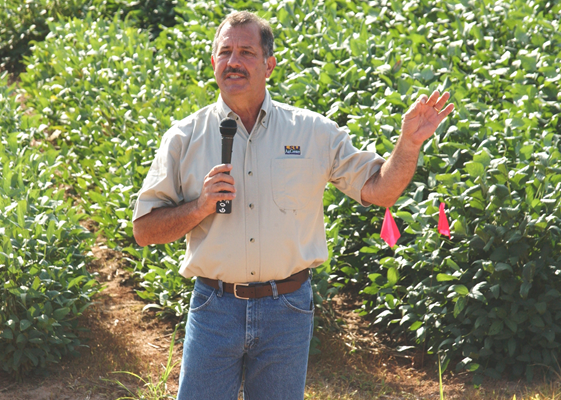 LSU AgCenter soybean specialist Ronnie Levy explains that for optimum yield, soybean planting should start on March 24 for Group V varieties and on April 15 for Group III and Group IV varieties. He spoke at a field day at the LSU AgCenter Dean Lee Research Station and Extension Center on July 18, 2013. (Photo by Rick Bogren.)

ALEXANDRIA, La. – LSU AgCenter researchers are continuing in their quest to find solutions to the No. 1 fungal disease in Louisiana soybeans – Cercospora leaf blight.

Price’s presentation was one of several given at the 12th annual field day at the LSU AgCenter Dean Lee Research Station and Extension Center.

The latest research is looking at triasole fungicides.

Fungicide resistance is only in Cercospora fungi and not in other species, he said.

There are no known soybean varieties that are resistant to Cercospora kikuchii, which infects soybean leaves, stems and pods, and plant breeders are continuing to look for resistant soybean varieties. “The most important piece of the puzzle is soybean resistance,” Price said.

In most of the state, varieties in maturity groups IV and V account for 90 percent of the soybeans planted, he said. “We want to see how early to plant to get optimum yields.”

Early planting creates a closed canopy early, capturing more sunlight and shading the soil from drying out more quickly. “The sooner we get canopy closure, the better the yield potential,” he said.

Levy has planted 12 varieties – four in group III and early group IV, four in late group IV and four in group V. The first planting was on March 22, followed by planting every two weeks until June 15.

“Last year, Louisiana had the highest yield and one of the earliest soybean crops,” Levy said, attributing the results to good weather and early planting.

The most effective approach is to apply combinations of herbicides that use two modes of action. “We have tools to use to control weeds,” he said.

AgCenter weed scientist Donnie Miller talked about glyphosate-resistant Palmer amaranth and the need to use other herbicides in addition to glyphosate to control the weed.

Concerning other chemicals that cause some injury to soybeans, Miller said some ought to be used, too. “A little injury to the crop is better than resistance in the weeds,” he said. “The resistance issue is causing people to change their vision.”

Randy Price, an AgCenter agricultural engineer, talked about spray drift and calibration. He said choosing the proper nozzle based on volume, applicator speed and pressure are important.

Price, who is responsible for maintaining and monitoring the AgCenter’s weather stations, said an analysis of weather observations showed that only about 40 percent of the days are appropriate for spraying.

Pope stressed the importance of cleaning applicator tanks between products. “You’re really going to have to clean your tanks out, or you’re going to kill some plants,” she said.

Beuzelin is conducting studies with hoppers in cages to see if it’s necessary to update recommendations based on 30-year-old research.

The redbanded stink bug is the most important soybean pest in Louisiana, said AgCenter entomologist Jeff Davis. Through its piercing, sucking mouthparts, it releases enzymes into pods and sucks out the material.

The current recommendation of 16 bugs per 100 sweeps is the threshold for spraying, Davis said.

Acephate is the only product that gives 90 percent control by using ¾ pound in each of two applications, he said. Rotate insecticides and follow label rates to prevent hoppers from becoming resistant.

Davis said if soybean loopers are still present after spraying, ask for assistance from AgCenter researchers, specialists or agents.

“Everything we use on other bugs will work on kudzu bugs,” Davis said about the most recent pest invading Louisiana soybean fields. The threshold level is one bug per sweep.

AgCenter entomologist Sebe Brown talked about the effectiveness of cotton seed treatments on thrips. This year, 90 percent of the thrips are tobacco thrips, which are easily controlled with the herbicide Reliant.

This year, plant bugs haven’t moved from host plants into cotton fields, he said. As other crops mature, such as corn and soybeans, bugs will move into cotton.

To scout for bugs after plants are tall and in bloom, switch from a sweep net to a drop cloth or shake sheet on the ground, Brown said. “Count the bugs, including nymphs, after shaking the plants over the cloth.”

Louisiana has the highest ration of resistant worms in the country – boll worms, corn ear worms and soybean worms are all the same, Brown said.

“Don’t use only pyrethroids,” he said. “This can lead to resistance in the insects.”

Myers said the AgCenter is breeding conventional cotton varieties that commercial companies can license and include in their own breeding programs.

Over the past three years, conventional hybrids have disappeared from the trials, Mascagni said.

Core demonstration plots in farmer fields can provide additional information on hybrid performance. “Look at results from AgCenter plots, core blocks, seed company reports and your own experience to select the hybrids to plant, he said.

“To counteract nitrogen loss, fertilizer needs to be in the right place at the right time from the right source,” Lofton said.

Glen Gentry, a faculty member at Dean Lee, gave an overview of the beef program there. He said the station will have a beef field day on Sept. 12.

Donna Morgan, with the AgCenter Master Farmer Program announced a Master Farmer University will be held Oct. 24-25 at Dean Lee. Another will be conducted in northern Louisiana later in the year.

This will allow producers to complete both Phase I and Phase II of the program at one time, she said.