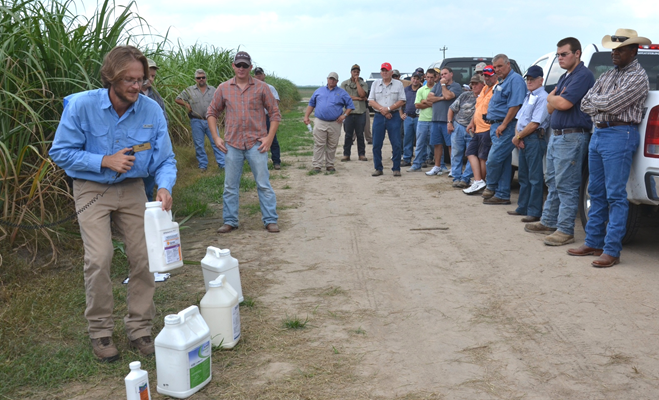 Continued use of the pesticide Confirm for sugarcane borers could lead to resistance, he said.

Beuzelin also said the Mexican rice borer continues its eastward migration, and its range has reached the Jennings area. The pest was found in cane fields this year in Calcasieu Parish, and it also was detected in Florida.

LSU AgCenter weed scientist Jim Griffin said bermudagrass should be sprayed early. “The more established it gets, the more roots it sets.”

The sugarcane variety HoCP 96-540 progresses slowly through a season, and the open canopy allows grasses to grow late into the season, Griffin said. Multiple applications of herbicides should be considered during the upcoming planting season.

LSU AgCenter cane breeder Michael Pontiff said developing new varieties is a numbers game. A variety might originate from one of 70,000 crosses with only four to six being final selections after more than eight years of testing.

Lines currently are compared against the top performer, HoCP 96-540, and breeding lines that don’t yield more than it are eliminated. Several varieties have attributes to consider, he said.

HoCP 04-838 has the best cold tolerance, Pontiff said, while L01-283 is best on heavy soil. HoCP 00-950 is good on light soils and is the shortest and sweetest variety, but it is susceptible to borer insects, so it probably shouldn’t be planted near residential areas.

Jim Simon, director of the American Sugarcane League, said the U.S. sugar beet crop got off to a slow start. “It won’t be anything like last year.”

Simon also said Mexican sugarcane growers have reduced their input investments because of the lower sugar prices, and that should reduce the amount of sugar produced in Mexico.