County agents, others get update on citrus disease 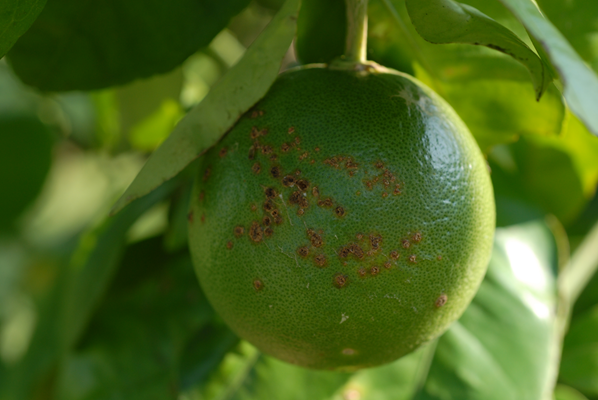 HAMMOND, La. – The LSU AgCenter held a training meeting on July 29 for county agents and Louisiana Department of Agriculture and Forestry personnel outlining the proper steps homeowners with citrus should take if they believe their trees are infected with citrus canker disease.

Since the disease was confirmed in citrus trees in New Orleans City Park in June, LSU AgCenter specialists and agents have been trying to get accurate information to homeowners as well as commercial growers, according to LSU AgCenter plant scientist Raj Singh.

“The main message is for homeowners to not move samples of leaves or branches from the suspected trees,” Singh said. “The disease is highly contagious and can be transferred to other trees just by handling infected trees.”

Singh instructed those in attendance to have homeowners take a picture of the suspected leaves or fruit and email it to their AgCenter county agent, who can be found at www.LSUAgcenter.com.

So far, the disease has only been confirmed in Orleans and Jefferson parishes, but county agents from as far away as Lake Charles attended the Hammond meeting.

Citrus canker disease, which was last seen in Louisiana in the mid-1900s, can devastate the citrus industry if proper steps are not taken once it’s observed, Singh said.

“It is a serious disease of citrus because it causes defoliation, premature fruit drop, blemished fruits and tree decline, and ultimately the infected tree stops producing fruit,” Singh said.

The pathogen can cause symptoms on all young, above-ground plant parts. Symptoms on leaves start as tiny raised blisters that may enlarge and become tan to brown as the disease develops.

“Lesions are visible on both sides of the leaves with water-soaked margins surrounded by a yellow halo,” Singh said. “As the lesion ages, the center becomes raised and corky and may fall out, giving it a shot- hole appearance.”

The disease was first found in City Park by a USDA inspector who was out jogging and just happened to see the infected tree, Singh said.

LSU AgCenter county agent Barton Joffrion from Terrebonne Parish said even though the disease hasn’t been found in his area, which includes Lafourche Parish, he wants to make sure he has all the facts just in case it does appear.

“We know that this is a serious disease that is highly volatile,” Joffrion said. “There are no preventive measures yet that have been identified.”

Joffrion reinforced the message of not trying to bring in samples from trees that may be infected.

“If growers would send their photo to the county agent in their parish, the agent would then forward the photos to the U.S. Department of Agriculture’s Animal and Plant Health Inspection Service, Plant Protection and Quarantine division for confirmation,” he said.

Bill Spitzer, the USDA plant health director in Baton Rouge, said once his office is advised of the location of a suspected tree, they will respond to confirm the disease.

Spitzer said a survey team from Florida is in Louisiana now, but so far they have only confirmed the disease in Orleans and Jefferson parishes.

“I believe the disease has been in the state for more than a year now,” Spitzer said. “If that holds true, then the track of Hurricane Isaac last August could very well have pushed it farther west.”

The bacteria can survive on weeds growing under the infected trees, Singh said. “Once the disease is confirmed, the tree will have to be destroyed with a two-year waiting period before planting another citrus there.”

The disease was first detected in Florida in 1910 and soon spread to other Gulf States including Louisiana, Singh said.

The last time the disease was seen in Louisiana was in 1940, when 1789 trees in six parishes were found positive in the state.

“We highly urge Louisiana residents to not move any infected citrus plant material within or out of state and to report any suspected trees to Bill Spitzer, state plant health director, at william.e.spitzer@aphis.usda.gov or 225-298-5410,” Singh said.