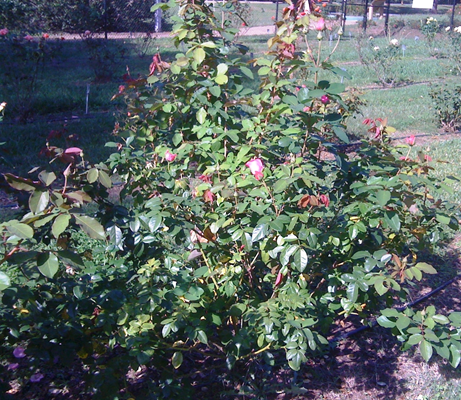 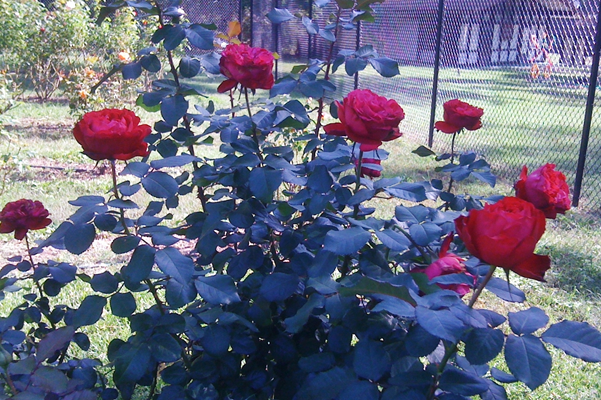 Traviata has been an impressive performer in Easy-Tea trials. (Photo by Allen Owings. Click on photo for downloadable image.)

HAMMOND, La. – Some people consider roses to be hard to grow. This is not true. Difficulty in growing roses is a common misconception that many gardeners have a hard time believing.

Gardeners may have shied away from growing roses in the past, but more and more research is demonstrating that roses can be grown with less care than folks previously thought.

An example is the recent LSU AgCenter research nearing completion at the Gardens of the American Rose Center in Shreveport. A study, called the Easy-Tea Hybrid Tea Research Project, was initiated to identify hybrid tea varieties that will flourish under minimum care conditions.

This project was started in February 2009, and the last data from this four-year study were taken in October 2012. The research project is a joint effort of the American Rose Society and the LSU AgCenter with some financial support provided by the ARS Research Endowment Trust.

Based on the highly successful Earth-Kind rose program initiated and managed through the Texas Agri-Life Extension Service, the Easy-Tea Hybrid Tea Project, as it name implies, focused on hybrid tea varieties rather than the shrubs and old garden roses primarily included in the Earth-Kind research. As with the Earth-Kind Program, Easy-Tea Hybrid Tea Project has identified existing rose varieties that can meet the criteria to be designated earth-friendly.

Many rose enthusiasts have wanted to encourage more people to enjoy growing our national flower by developing a program to test and identify hybrid tea rose varieties that would require a minimum of care – including minimal use of fungicides.

The function of the Easy-Tea Hybrid Tea Rose Research Program was to evaluate 30 carefully selected varieties of hybrid tea roses to identify those with the highest level of natural disease resistance.

Some of the hybrid tea roses that have performed well during a portion of this study have included Frederic Mistral, Mister Lincoln, Pope John Paul II, Rio Samba, Shreveport, Tahitian Sunset, The McCartney Rose, Tiffany, Traviata, Pink Traviata, Tropicana and Sunset Celebration. The LSU AgCenter will be finalizing the results of this study and have the list of winning roses available later this year.

Other rose research ongoing at the LSU AgCenter, primarily at the Hammond Research Station, includes using plant growth regulators to lessen pruning requirements on Knock Out roses, a landscape trial of Drift roses, blackspot susceptibility studies on heirloom tea roses, evaluation of the landscape performance of the new Biltmore Rose Collection and more.

In addition, Burden Center in Baton Rouge had been the site of an All-America Rose Selection display garden, and starting in 2013 it will be one of the new national sites for the American Garden Rose Selections program.

You can see more about work being done in landscape horticulture by viewing the LSU AgCenter Hammond Research Station website. Also, like us on Facebook. You can find an abundance of landscape information for both home gardeners and industry professionals.