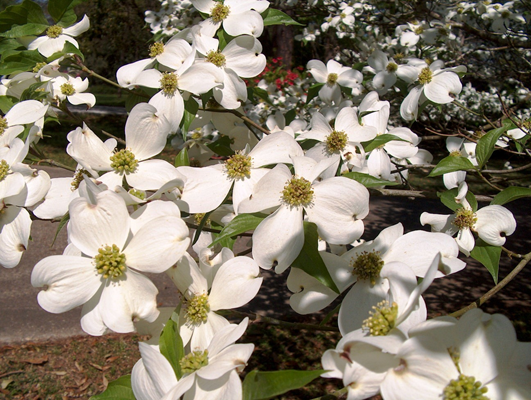 Nothing beats the beauty of dogwood blooms in early spring. (Photo by Allen Owings. Click on photo for downloadable image.)

HAMMOND, La. – Our great dogwoods (Cornus florida) once reigned supreme as one of the traditional Southern landscape plants. Dogwoods are deciduous, spring-flowering trees native to the eastern half of the United States and grow to a height of 30 feet. They are beautiful plants for partially shady, understory and sandy soil areas.

Something has happened to our dogwood populations over the past 25 years. We see far fewer dogwoods in native woods around the Southeast, and many garden centers do not sell dogwood trees anymore. Nursery growers are producing only limited numbers of dogwoods now as compared to the golden age of dogwood production 30 years ago. What happened?

Dogwoods in the South have been declining and dying at alarming rates over the past 20 years. This has been attributed to many factors. Diseases such as dogwood anthracnose and powdery mildew have taken a toll. Some entomologists feel dogwood borer insects have been partially to blame. In addition, changes in environmental conditions and drought stress have killed trees.

In the home landscape, we forget that dogwoods prefer shade, well-drained soil and acidic growing conditions. So we tend to plant them in full sun and clayey soil with alkaline pH and wonder why they die or never thrive.

Dogwood anthracnose, caused by the fungus Discula destructiva, is a serious disease of flowering dogwoods and continues to make an impact on the vitality of landscape and forest dogwoods. We also see leaf spots, leaf blight and dieback of lower branches.

Another significant problem on dogwoods is powdery mildew. It started about 20 years ago and persists today. Before then, we never saw powdery mildew on dogwoods. Powdery mildew is largely responsible for the loss of mature dogwood trees on the LSU campus in Baton Rouge.

Dogwood borers can damage many trees in localized areas in a short period of time. Typically, trees will be stressed to begin with. The larvae germinate from eggs laid by moths, and the young borers feed underneath the bark on the phloem and cambium tissue. Symptoms of borer infestation include reduced vigor and smaller blooms along with localized limb death.

You can identify borers by their small holes in the bark where sawdust-like frass emerges. Dogwoods in sun get much more borer damage than dogwoods that are in shade all day. Control is difficult, and the responsible moths are rarely seen.

Some horticulturists note changing environmental and climate conditions as among the reasons for dogwood population loss in the South. In Louisiana, we have seen dogwoods dying due to drought. This has also been the case in other states. Much of the drought loss with dogwoods dates to 1999 and 2000. Rainfall was 30-50 percent of normal for extended six-month periods several times during those years.

The late 1990s and early 2000s also were the beginning of increasing average summer high temperatures. Variable climate is playing a large role in the success of landscape plantings and native population dynamics.

We all love our dogwoods, but other Cornus species are available for use in the South. Some knowledgeable horticulturists and home gardeners are now planting Cornus angustata. This tree is commonly called Empress of China, and is an evergreen dogwood species. A shrubby native dogwood with viburnum-like flowers is the roughleaf dogwood Cornus drummondi. In Louisiana, the two-winged silverbell (Halesia diptera) is frequently recommended as a dogwood replacement.

To get the best from your dogwoods, plant improved, disease-resistant varieties. It is best to locate dogwoods in an understory or morning sun/afternoon shade location. The native soil in the area needs to be sandy or silty. Avoid clay soil when planting. You need to plant individual trees on slightly raised mounds or in improved landscape beds. The soil pH for dogwoods needs to be moderately acid (5.5 is ideal). Plant in the late fall through midwinter for best results, and do not fertilize very much. This will lead to improved success.

You can see more about work being done in landscape horticulture by viewing the LSU AgCenter Hammond Research Station website. Also, like us on Facebook. You can find an abundance of landscape information for both home gardeners and industry professionals.