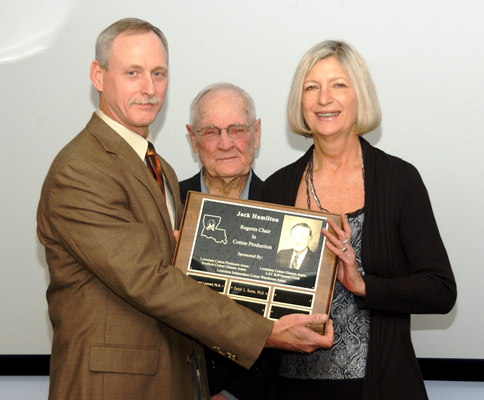 David Kerns, left, receives a plaque designating him as the Jack Hamilton Regent Chair in Cotton Production from Lee Hamilton Trichel, daughter of Jack Hamilton, and from Ray Young, representing the Louisiana cotton industries, which established the endowment that supports the award. (Photo by Rick Bogren. Click on photo for downloadable image.) 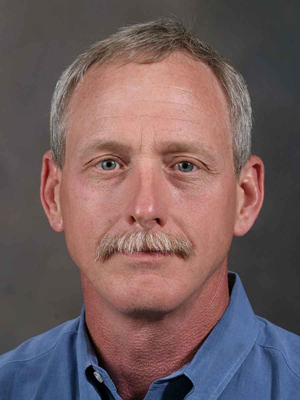 WINNSBORO, La. – LSU AgCenter entomologist David Kerns was honored Jan. 18 in a ceremony recognizing him as the Jack Hamilton Regents Chair in Cotton Production in the AgCenter.

"A chair enables us to attract and retain the very best,” said LSU AgCenter vice chancellor John Russin. “The AgCenter is committed to supporting the row crop agricultural industry in Louisiana.”

"Professorships and endowed chairs offer the prestige of recognition, and the supplementary stipend provides a tangible reward for merit," he added.

"Endowments enable us to match state funds,” said LSU AgCenter vice chancellor Paul Coreil. “Jack Hamilton’s legacy as a cotton farmer and ginner allowed us to establish a chair in testament to him and the cotton industry in Louisiana.”

“It’s hard to get the best, and we need industry help,” Coreil said. “This is a way we can do it.”

“The funds for the endowment were the result of a combined effort from all segments of the Louisiana cotton industry,” said Rogers Leonard, LSU AgCenter associate vice chancellor and previous holder of the Hamilton Chair. “These funds came from growers, warehouses and ginners.”

Although Louisiana cotton acreage has diminished in recent years, cotton is still important to the state’s agriculture, said Ray Young, a long-time crop consultant and representative of the cotton industry at the event.

“We all grow crops along with cotton,” Young said, mentioning corn and soybeans in particular.

A native of Texas, Kerns was an agricultural consultant. He worked for a leading agrichemical company before beginning his research and extension career in 1995. He was on the faculties of the University of Arizona in Yuma and Texas A&M in Lubbock before joining the LSU AgCenter in 2012.

In commenting on his work with a variety of crops, Kerns expressed his true love is cotton.

“I don’t care if there is only one acre of cotton in Louisiana some day,” he said. “I’m a cotton entomologist, and I’ll be in that acre.”

It was first presented in 2006 to B. Rogers Leonard, who recently moved into the position of associate vice chancellor and associate director of the Louisiana Agricultural Experiment Station in the LSU AgCenter.

The endowed chair is funded by private contributions of $600,000, matched with $400,000 from the Louisiana State Board of Regents. The income from the endowment of $1 million helps support research programs, faculty travel, support staff salaries and resources for research and technology transfer projects.