AgCenter scientists give advice to ag consultants at their annual meeting 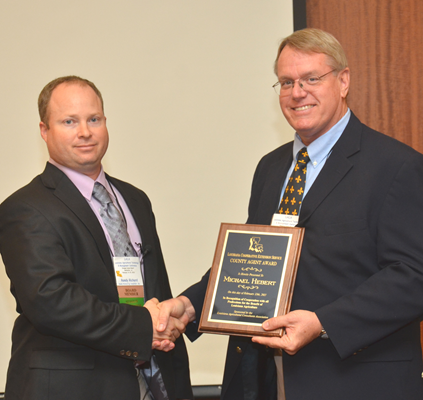 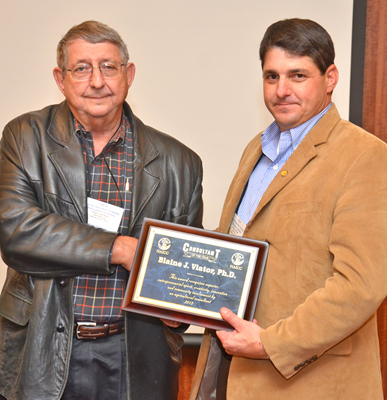 Blaine Viator receives the BASF National Consultant of the Year award from his father, Calvin Viator. Photo by Bruce Schultz 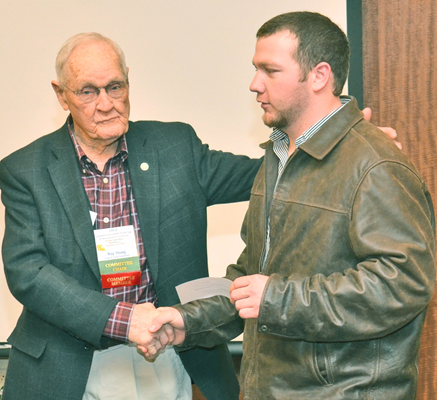 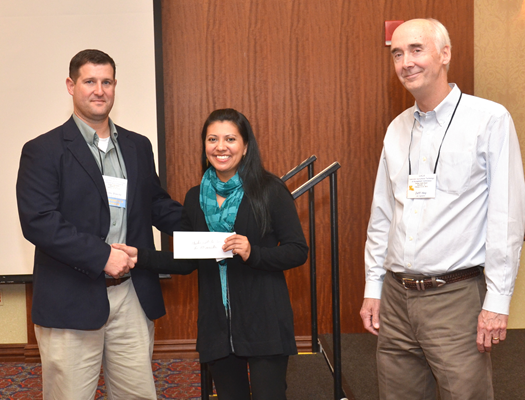 In addition, Blaine Viator was presented the BASF National Consultant of the Year award, which was given by the National Alliance of Independent Agricultural Consultants.

AgCenter Chancellor Bill Richardson said more state budget cuts are expected after July 1, the start of the next fiscal year, after a midyear cut of $1.7 million. Since 2008, he said, the LSU AgCenter has suffered $30 million cuts to its budget.

David Bollich, manager of the new Louis-Dreyfus grain elevator at Port Allen, said the $130 million renovation of the facility on the Mississippi River will be ready this fall to start receiving grain.

“Everything that moves grain is either being replaced or renovated,” Bollich said.

Mike Strain, commissioner of the Louisiana Department of Agriculture and Forestry, said Louisiana needs to build a port facility to handle the new Panamax ships, which are so large that the Panama Canal had to be upgraded to accommodate their size. And they are too large to travel on the Mississippi River. The mammoth vessels will carry huge amounts of grain, and that will help farmers with better cash prices for their crops, he said.

“We need a port terminal for Panamax ships at the Mississippi River,” Strain said. “Panamax is going to change how everything is done.”

Consultants heard considerable talk about herbicide-resistant weeds. Jim Griffin, LSU AgCenter weed scientist, said the issue is the most significant threat to agriculture in the past 30 years.

Daniel Stephenson, LSU AgCenter weed scientist, said Louisiana farmers are still able to avoid the problem that has been experienced in Arkansas. “We’re not in the boat the other states are in, but we are moving toward it.”

Another LSU AgCenter weed scientist, Eric Webster, said rotating crops and using different herbicides will lessen the chances for resistance. “Rice and crawfish is not a rotation,” Webster said.

He said attacking weeds in the early stages is necessary for good control. “We can’t wait until it gets 6 or 8 inches.”

Josh Lofton, LSU AgCenter agronomist, said adding potassium and phosphorus to soil should only be done if a recommendation is made after a soil test.

He said farmers aren’t likely to continue using conventional varieties released by universities now if a problem surfaces the first time they are used. “They’ve got to hit a home run the first year out, or they are gone.”

He said public varieties are not marketed and promoted as the variety releases by commercial seed producers, so they are not highly visible when variety selections are made.

“We have got some good varieties we are not looking at hard enough,” Linscombe said.

Linscombe said the Kellogg Co. is currently evaluating the medium-grain variety Caffey to be used in the company’s products.