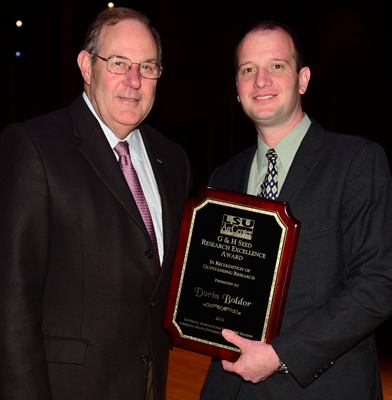 Dorin Boldor, an associate professor in the Department of Biological and Agricultural Engineering, at right, won the G & H Seed Company Research Award at the LSU AgCenter annual conference. At left is LSU Vice President for Agriculture Bill Richardson. (Photo by John Wozniak) 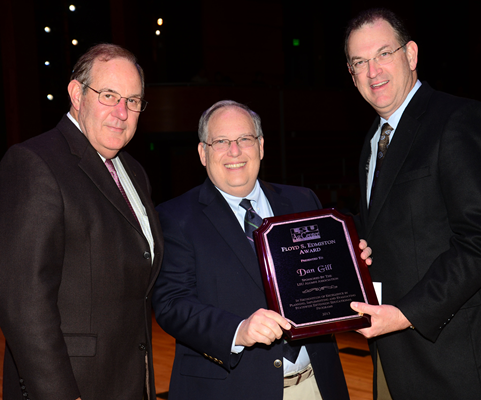 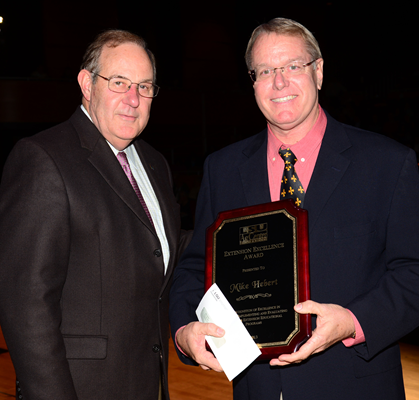 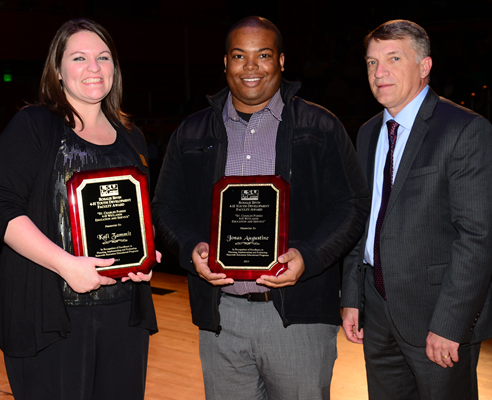 BATON ROUGE, La. – Faculty and staff members at the LSU AgCenter and the Southern University Agricultural Center received awards for exceptional extension and research programs at a joint annual conference on Dec. 16-17.

The two AgCenter teams winning awards were the Acadiana Beef Cattle Educational Program team from southwest Louisiana and a team of researchers from the Department of Biological and Agricultural Engineering.

The six AgCenter faculty awards were:

G & H Seed Company, Inc., Research Award: Dorin Boldor, an associate professor in the Department of Biological and Agricultural Engineering, uses advanced microwave technology to produce biofuels from nonfood crops such as tallow tree seeds. This microwave technology makes it easier to extract the oil from the feedstock and convert the biomass to biofuel.

Floyd S. Edmiston Award: Dan Gill is one of the state’s most recognizable horticulturists with his Get It Growing newspaper columns and television and radio segments. He has played a pivotal role in the advancement of the Louisiana Super Plants program, which promotes outstanding plants for Louisiana landscapes.

Doyle Chambers Research Award: Don LaBonte has been involved with breeding sweet potatoes at the AgCenter since 1988. He has recently helped introduce two varieties that may supplant Beauregard, a variety released in 1987, which is the industry standard. The variety Orleans is a sweeter variety when compared to Beauregard, and the variety 07-146 is geared toward the processing sector with yields up to 20 percent higher than Beauregard.

Another AgCenter award, the Rosalie Bivin 4-H Youth Development Faculty Award, went to Jonas Augustine, program assistant, and Kali Zammit, assistant agent in St. Charles Parish. Both are involved in educating young people about the importance of Louisiana wetlands and the role wetlands play in the ecosystem. Augustine and Zammit conduct field days and coordinate wetland plantings in St. Charles and adjoining parishes.

In addition, Mike Salassi, professor in the Department of Agricultural Economics and Agribusiness, was given the award for outstanding article for 2013 in Louisiana Agriculture, a quarterly magazine published by the AgCenter. His article concerned the economic consequences of storm damage on rice production.

Mellion-Patin received the Outstanding Specialist Award for work with socially disadvantaged, limited-resource agricultural producers and their families. She has been awarded $4.9 million in competitive grant funding to conduct extension programs, such as the Small Farmer Agricultural Leadership Institute and Wisteria Alliance Project. During 2013, she worked with the Farmer to Farmer Program, which is a joint effort with the University of Fort Hare, Eastern Cape, South Africa; Florida A&M University in Tallahassee; and the U.S. Agency for International Development.

Marshall received the Outstanding Researcher Award for her contribution to the field of small-scale livestock production. Marshall has published extensively and garnered more than $2.6 million in federal funding. One of her projects is JAGS in AG, which is designed to introduce young people to the world of agricultural research.