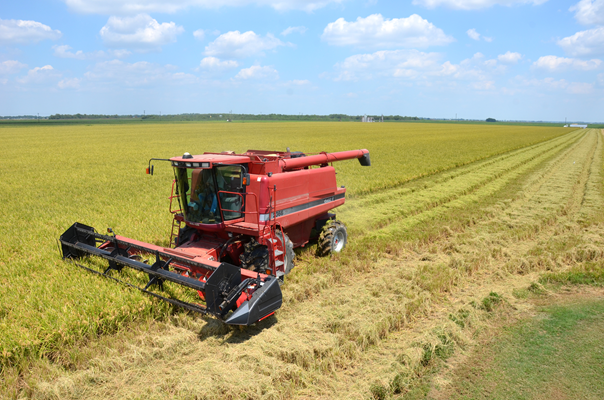 The rice being harvested is LA2065, a medium-grain Clearfield that is a potential release for 2014. Photo by Bruce Schultz (Click on image to pull up downloadable version)

CROWLEY, La. – Harvest of the south Louisiana rice crop is winding down, and favorable reports are the rule.

Linscombe said the yields and exceptional milling quality can be attributed to favorable weather. Night-time lows were mild, he said, with the critical month of June having only six nights above 75 degrees. A lack of thunderstorms at flowering also helped, he said, and daytime high temperatures were not excessive either.

Those good conditions helped offset the cool spring that delayed the crop by as much as two weeks.

Linscombe said yields for late-harvested rice have remained consistent with the earlier crop. He said many harvested fields have already been flooded for a second crop.

Keith Fontenot, LSU AgCenter county agent in Evangeline Parish, said yields have remained good throughout the harvest. “I’m still hearing about some pretty strong yields all the way around.”

He said yields just shy of 50 barrels an acre are not uncommon. “I’ve had people with yield monitors in their combines tell me they are going higher and staying higher than they’ve ever been.”

Fontenot echoed Linscombe’s comments about quality, and he is seeing slightly more acreage going into second crop production. “Farmers are excited with the way the stubble looks.”

Barrett Courville, LSU AgCenter county agent in Acadia and Jefferson Davis parishes, said Acadia Parish yields are above average. He said the acreage for second crop this year is about the same.

“For the spring we had, they are more than happy with the results because it was a really tough spring,” Courville said.

Andrew Granger, Vermilion Parish county agent, said yields have exceeded 40 barrels an acre. He said rainfall during harvest resulted in rutted fields, but he said roughly a third of the parish’s 45,000 acres will be used to grow a second crop.

Vince Deshotel, county agent in St. Landry Parish, said yields have ranged from more than 60 barrels to 35 barrels, but the average is probably in the low 40s.“Rice yields have been good, and the harvest has been real good.”

Johnny Saichuk, LSU AgCenter rice specialist, said good yields seem to be routine this year, and milling quality is excellent, with roughly 90 percent of the south Louisiana crop in the bins. “Fifty-barrel yields are common, and that’s without the second crop.”

Saichuk said he has five fields in his verification program, and so far the three that have been harvested have exceeded 50 barrels.

Saichuk said he had returned from a trip to Arkansas where the rice acreage may have dipped below 1 million acres for the first time in a long time. “I’m hoping that’s going to be a good thing for the Louisiana farmers.”

The north Louisiana harvest is just starting, and indications are it will mirror the results in south Louisiana, Saichuk said.

Meryl Kennedy, director of marketing and sales for the Kennedy Rice Mill in Mer Rouge, said the first harvest results are encouraging with good yields and excellent milling. “So far, the farmers have been happy.”

She said there are encouraging signs for the rice industry going into 2014. “We’ve actually had some inquiries about rice for next year.”