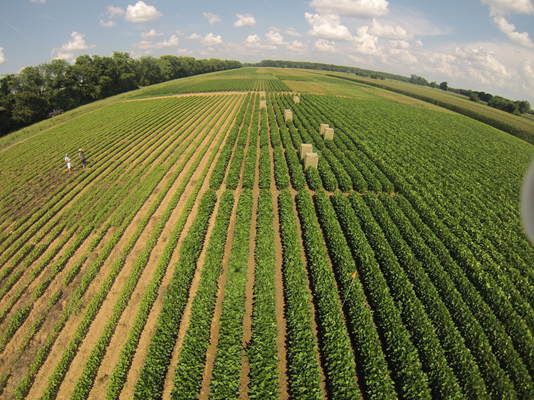 An aerial photo of the field in which entomologist Julien Beuzelin is conducting his research on the threecornered alfalfa hopper. He releases hoppers inside the cages and compares yields with the uncovered soybeans. Photo by Michel Trujillo 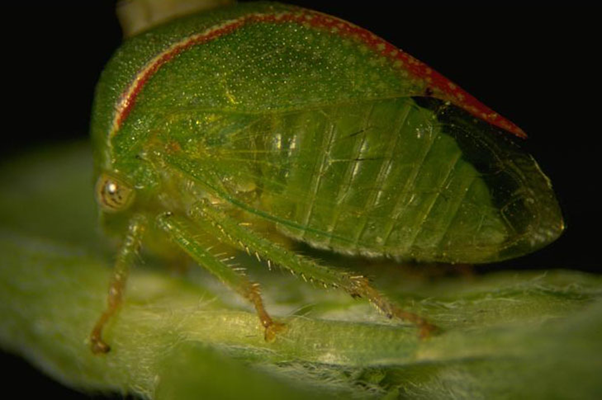 ALEXANDRIA, La. – The threecornered alfalfa hopper is in all Louisiana soybean fields. But how much of a threat the insect is to yields is being studied by Julien Beuzelin, LSU AgCenter entomologist.

The bright green insect, about a quarter inch long, sometimes feeds on soybean seedlings, but usually a soybean crop can compensate for the lost plants. Beuzelin said seed treatments are effective at protecting young plants against hoppers, however.

Later in the reproductive stage of soybean growth, hoppers can feed on the plants and disrupt the movement of nutrients, possibly preventing pods from filling.

He said cultural practices have changed since the 1980s when the insect was last studied in depth. “So we thought we should look again at the hopper.”

He said soybeans are planted earlier now and different maturity groups are used in Louisiana.

Currently, the threshold for spraying in Louisiana is one adult hopper per sweep starting at pod set, compared to two per sweep in Mississippi.

Beuzelin said his project, which is funded by the Louisiana Soybean and Grain Research and Promotion Board, will evaluate if the hoppers caused a yield loss. A cage study, with hoppers released inside cages constructed over soybean plots, will be conducted alongside soybeans not covered with cages, to see if a yield loss can be found.

That work will be done at the Dean Lee and Macon Ridge research stations, working with LSU AgCenter entomologist David Kerns. “If we don’t see any impact on yield, we will repeat that study for at least another year to make sure it wasn’t a mistake.”

If a yield loss occurred, the threshold will be evaluated. He said growers also will be surveyed on whether the hopper is perceived as a problem in their crops. Also, two dozen commercial fields will be scouted to see if hoppers are causing soybean damage.