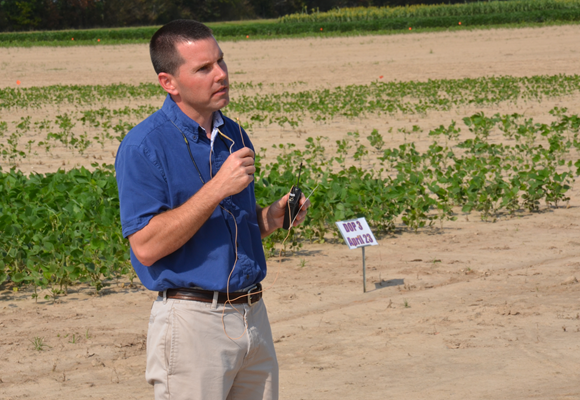 Current AgCenter planting recommendations are April 15 until May 10 for Group IV soybeans and March 25 through May 5 for Group V.

“Those are accurate for north Louisiana but may not be for south Louisiana,” Harrell said. That time frame was derived from research conducted at the AgCenter Dean Lee Research Station near Alexandria and at the AgCenter Macon Ridge Research Station near Winnsboro. Both are approximately located near 31 and 32 degrees north latitude while Crowley sits at 30 degrees north latitude.

North Louisiana soybean farming usually involves planting on raised beds, with the possibility of furrow irrigation. However, south Louisiana rice farmers are reluctant to use raised beds because of the expense of doing the dirt work in a soybean-rice rotation. And irrigation is not as feasible for soybeans grown on flat ground because of the potential for injury.

Even though southwest Louisiana soybean acreage is low, the parishes of Jefferson Davis and Acadia account for nine percent of the state’s 1.1 million soybean acres planted last year.

“We are emulating what is common for southwest Louisiana,” Harrell said.

Harrell said at least three years’ data will be needed before any recommendations can be made, and he would prefer to have five years’ worth.

Along with the planting-date project, Harrell also will be growing soybean research plots for LSU AgCenter plant pathologist Clayton Hollier, who is conducting soybean disease research.

Harrell also is working with LSU AgCenter entomologist Jeff Davis on a project to see if insect pests found in soybeans are affected by potassium fertilizer.