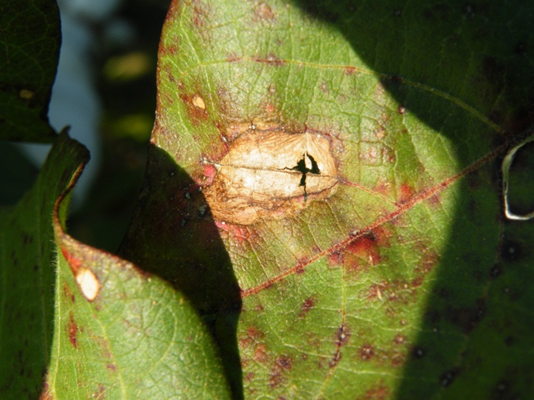 “This disease has been reported for several years and mainly in other states during the past few years,” Price said. “But it seems to be more widespread this year.”

Price said the recommendation to growers right now is to monitor fields. There’s no need to automatically apply a fungicide at this point.

The decision to apply a fungicide should be made on a field-by-field basis and take into account the severity of the disease, growth stage of the crop and yield potential, he said.

The disease is not new in the state, Price said. “Leaf spot is known across the Midsouth, but we just haven’t had as many reports as we have seen this year.”

The two most common leaf spot diseases are Alternaria and Cercospora, but Price reminds growers that this is not the Cercospora that infects soybeans.

“These leaf spots are usually found on cotton that is stressed from fertility or drought issues,” Price said.

During humid conditions, the centers may appear sooty – these are the spores of the fungus.

“In some cases, the centers may deteriorate and fall out, giving the leaf a shot-hole appearance,” Price said.

The fungus can overwinter in infected plant debris from the previous season, he said. “Other sources of inoculum are adjacent cotton and weeds.”

“The symptoms also are similar to those caused by Alternaria,” he said. “The initial symptoms are usually present late season and occur as small red lesions on the leaves.”

In most cases, Alternaria and Cercospora leaf spots are present on cotton growing in less-fertile areas of a field. Yield losses are thought to be minimal because they typically occur in areas of low production.

“The risk of these diseases can be reduced by plowing under infected plant debris before planting,” Price said.

LSU AgCenter scientists are currently evaluating the incidence and severity of leaf spot on different varieties in northeast Louisiana.