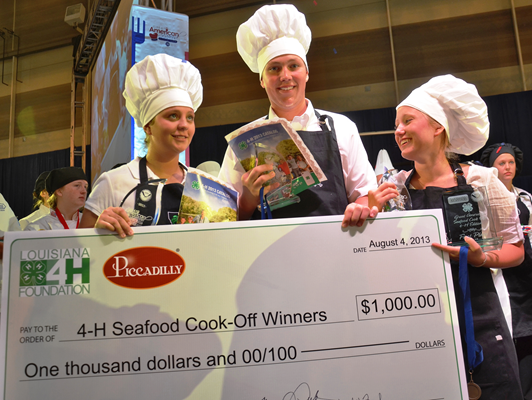 Katherine Trahan, Austin Gaspard and Paige Patout celebrate their victory with a $1,000 check from the Louisiana 4-H Foundation and the Piccadilly Corp. The team won the 2013 4-H Seafood Cook-Off in New Orleans Aug. 4. (Photo by Bruce Schultz)

“We will go home and keep cooking for our families,” Gaspard said just minutes after winning.

For their victory, they won $1,000 from Piccadilly Corp. and the Louisiana 4-H Foundation.

Vermilion Parish had stiff competition from 4-H members from two land-locked states. A Kentucky team won second with a colorful and artfully stacked dish and an entertaining presentation to the judges, and an Arkansas team placed third. Other teams were from Oklahoma, South Carolina and Mississippi.

Gaspard said the use of Vermilion Bay Sweet Shrimp, peeled and packaged at the Port of Delcambre, was a key ingredient. “We tried it, and it was perfect,” she said. “They cook consistently every time, and you know it is fresh shrimp.”

Louisiana had another entry. Catherine Guinn and her sister, Rosie Guinn, of Jefferson Davis Parish, cooked Guinns’ Gourmet Crab Cakes, a family recipe. Cooking is a way of life for the Guinn family.

“We have 10 kids in the family, and 11 grand kids and we cook every Sunday,” said Catherine Guinn. “Rosie and I are always the head cooks.”

Rosie Guinn said the calories have been reduced to meet the competition requirements for a dish not to exceed 500 calories.

The sisters were just glad to be at the competition. “It is such an honor, I don’t care if we place or not,” said Rosie Guinn.

Kori Myers, LSU AgCenter 4-H agent in Jefferson Davis Parish, said the girls have been working hard. “They started training in May, and they made the dish twice a week.”

The competitors intensely focused on preparing their dishes.

Katherine Trahan’s mother, Stacie Trahan, said her daughter appeared to be working well despite the pressure. “I can tell right now she’s in the zone.”

Katherine Trahan has been cooking since the third grade, Stacie Trahan said of her daughter. “We come from a long line of cooks and rice farmers.”

When she had to tend to her sick mother, Katherine blossomed as a cook out of necessity, Stacie Trahan said. “She took on the role of cooking for the family.”

Stacie Trahan said her daughter has gained immeasurable skills from 4-H. “It has taught her self-confidence and how to work together as a team and independently.”

Paige Patout has cooking in her blood. A cousin is New Iberia chef Alex Patout.

“She’s been cooking since she could reach the stove,” said Paige Patout’s mother, Vickie Patout.

As Austin Gaspard prepared the crawfish, his mother, Michelle Gaspard, said her son has helped her in the kitchen for years. “He likes to throw things together and try different things.”

The team practiced enough – cooking the dish 20 times – that they didn’t even need to refer to the recipe, Michelle Gaspard said.

As well-rehearsed as they were, The Vermilion Parish team had a few tense moments that would have made for drama on television cooking shows. When Paige Patout removed the skewered shrimp from the oven, she banged the platter against the door, almost upsetting the tray. The hot metal burned her arm.

“We also had a little bit of trouble with our garnish,” said Katherine Trahan. She explained that the green onions they had bought the day before at the French Quarter Farmers Market weren’t quite the same as they had been using, and they didn’t curl as nicely after being cut and dipped into ice water.

Paige Patout admitted, after serving their dish to the judges, that they were nervous when preparing the food as the cameras and lights were thrust at them to capture every movement. “We’d like to say we weren’t nervous, but we were.”

The team was advised to tone down their seasoning slightly because the judges might not be accustomed to spicy south Louisiana food.

“I am extremely proud of our team. They are a true testament to the fact that the 4-H program builds leadership traits in young people,” Waits said. “They share this victory with their leaders, coaches and supporters who have helped them along the way, and they will be excited to share their experience with others as the new school year gets underway.”

Ewell Smith, executive director of the Louisiana Seafood Promotion and Marketing Board, credited Dwight Landreneau, retired LSU AgCenter vice chancellor for extension, for coming up with the idea of a 4-H seafood cooking competition.

The seafood board is a major sponsor of the event, and Smith said the National Oceanic and Atmospheric Administration also provides support for the competition, now in its fourth year. It is held in the Morial Convention Center during the Louisiana Restaurant Association Food Service Expo.

Smith said the competition is entertaining. “We enjoy this because it’s fun to see the excitement of the kids. They are supporting our fishermen, and that’s what it’s all about.”

Quincy Cheek, LSU AgCenter regional nutrition agent, said Louisiana 4-H already has received inquiries from West Virginia, Oregon and Kansas about the 2014 event. “This event is top-notch, and we intend to keep it that way – getting better and better each year.”

Talks are already under way with Piccadilly and Southwest Airlines for additional sponsorship funds and award money, Cheeks said.

“When we started this competition back in 2010, I had no idea it would blossom into such a prestigious national competition,” Cheeks said.