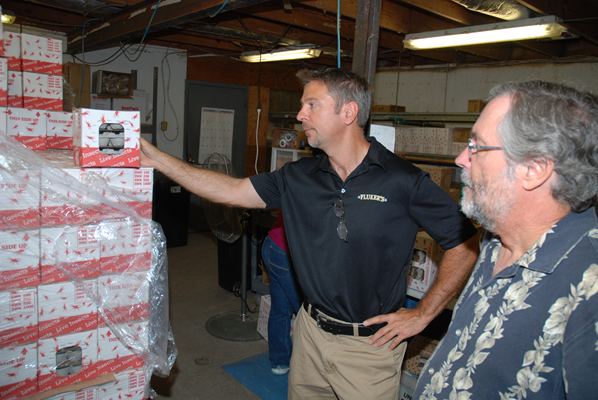 David Fluker, owner of Fluker Cricket Farm in Port Allen, shows Christopher Carlton, LSU AgCenter entomologist and director of the Louisiana State Arthropod Museum, his summer shipping containers. Fluker is working with the LSU AgCenter to avoid contracting the virus, that nearly wiped out the European cricket market about 10 years ago. (Photo by Johnny Morgan)

His operation, Fluker Cricket Farm across the Mississippi River from Baton Rouge, has been in business since the 1950s when his father started it as a fish bait enterprise.

“The humble beginnings of cricket culture in the United States can be traced back to the 1950s when their use as fish bait became widespread enough to be a commercially viable enterprise,” said Christopher Carlton, LSU AgCenter entomologist and director of the Louisiana State Arthropod Museum.

During the first decade of this century, European cricket operations were devastated by the virus Acheta domesticus densovirus, Carlton said. “It paralyzes and kills crickets before they reach reproductive age.”

Development of an alternative cricket for commercial rearing became an urgent issue for United States and Canadian cricket producers around 2009, Carlton said. “A number of operations have succumbed to the virus and suspended operations.”

Larger farms like his are more interested in shipping their crickets for animal feed, such as reptiles and birds at zoos, Fluker said. “Even hedgehogs like to eat crickets.”

“There are a number of cricket farms in the state and around the country, but we’re a little different,” Fluker said. “We’re the only farm that has crickets, mealworms, superworms and a complete line of other reptile products such as freeze-dried insects. We’ve kind of joined the two together.”

Fluker and his 24 employees ship more than 5 million crickets a week out of his facility to Petco, PetSmart, Wal-Mart and mom and pop stores across the nation, said Carlton.

As the threat of the virus becomes more likely, Fluker has decided to breed some wild species that are not affected by the virus with help from Carlton.

During September 2010, LSU AgCenter scientists at the Louisiana State Arthropod Museum led by Carlton began a series of studies in cooperation with Fluker Farms to explore additional species for possible use as an alternative to the house cricket or brown house cricket.

“Researchers in Canada are exploring antivirus therapies to mitigate the effects of the virus, but so far without success,” Carlton explained.

Carlton and Fluker are studying the Jamaican field cricket, which is a tropical species that is unable to survive in the wild throughout most of Europe, but concern exists in the United States that it may become established outside its normal range with widespread rearing and shipping.

In limited trials in the United States, the Jamaican field cricket has not met expectations for growth and productivity for optimal commercial use, Carlton said.

Numerous other domestic species of field crickets occur in the United States. But most have a resting phase called diapause, at some point during the year that renders them unsatisfactory for year-round cultivation, and reproductive potentials are suboptimal for commercial production, Carlton said.

Fluker said he is so serious about protecting his business that he even bakes incoming mail for sterilization purposes.

“We pretty much have a closed industry,” Fluker said. “We don’t sell to anybody here, it’s all mail ordered.”

The virus wiped out the cricket industry in Europe in the late 1990s, Fluker said. “Around 2002 is when it was known to be here in America. We haven’t seen it in the state yet.”

Fluker’s business stays steady through the year, but shipping becomes an issue during the winter when he ships to cold climates like Billings, Montana.

“There are also some summer shipping issues, and we have to adjust the packaging for the high temperatures,” Fluke said.

Based on experiences of LSU AgCenter researchers after three years of study, the tropical house cricket is a viable candidate for commercial rearing and marketing.

Efforts are now under way to address regulatory issues with the U.S. Department of Agriculture and state agencies that will allow interstate shipping of tropical house crickets. Regulatory and quarantine requirements are less stringent for this species than for non-native, non-established species, Carlton said.