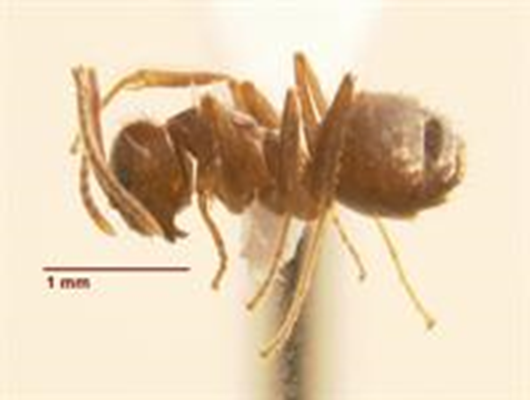 The rasberry crazy ant is approximately 2 mm in length, reddish-brown and moves around in a crazy manner.(Photo by Victoria Bayless. Click on photo for downloadable image.)

NOTE -- Since this release was published, EPA has cancelled the special label for Termidor, but the regular label is still in effect. Consult the label whenever you use Termidor.

BATON ROUGE, La. – LSU AgCenter entomologists have been preparing for the tawny crazy ant population to increase in Louisiana for a while – the wait is over for residents in north Baton Rouge.

Residents in the areas of Scotlandville, Baker and Central have seen the populations of these invasive pests explode in the past few days, said LSU AgCenter entomologist Gregg Henderson.

Also known as rasberry crazy ants, they are a new invasive species, , Henderson said. The ants build to huge populations with multiple nests and multiple queens.

“If one homeowner’s property is infested, many others in the neighborhood are also infested,” he said.

They do not sting, and the bite – if they bite at all – cannot be felt by most. The ants tend to run around the house and if sprayed, die in huge numbers looking like someone spilled coffee grounds, Henderson said.

These pests are tiny, reddish-brown, and they run around in a crazy manner, said Victoria Bayless, a research associate in the AgCenter Department of Entomology.

The crazy ant was first recorded in the United States in southern Florida during the 1950s, but populations remained local, Bayless said.

In 2000, the number of reports escalated and continued to increase. In 2002, they were reported in Houston, Texas, by Tom Rasberry, a pest control operator. Thus, the common name “Rasberry crazy ant” does not imply the ants are attracted to raspberries.

“In 2009, the ant was collected on the Mississippi coast. And since that time, entomologists have been expecting the crazy ant to invade Louisiana from either the Texas population or the Mississippi population,” Bayless said.

“One homeowner was in a line with 15 others at a Home Depot recently looking for a solution to this specific ant problem,” Henderson said.

Henderson said he was told that a Home Depot employee suggested Terro Liquid Bait. “While this product is excellent, it will not curb the huge populations of this ant species,” he said.

The Louisiana Department of Agriculture and Forestry has recently allowed for a special needs treatment using the insecticide Termidor, with the active ingredient fipronil. “Pest control operators tell me this works the best,” Henderson said.

The chemical Transport, with active ingredients acetamiprid + bifenthrin, and bifrentrin, will be labeled under several trade names that are alternatives, Henderson said.

Multiple treatments are necessary to reduce ant numbers around the home, he said. “Monthly or quarterly spray treatments may be necessary.”

Henderson said homeowners should be sure to read the label and follow the instructions before applying any insecticide.