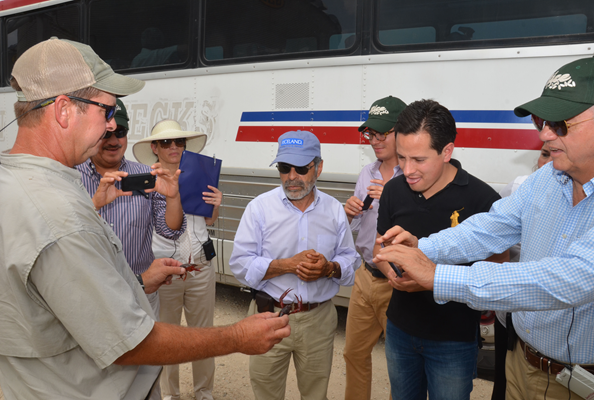 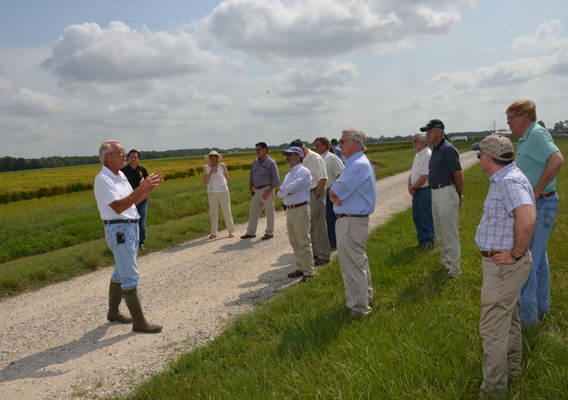 Steve Linscombe, director of the LSU AgCenter Rice Research Station, at left, talks about rice variety development at the station during a visit by representatives of the Colombian and American rice industries. (Photo by Bruce Schultz)

The group is part of a consortium formed to decide how funds, resulting from the Free Trade agreement with Colombia, will be spent.

To sell American rice duty-free in Colombia, trading companies buy certificates to import the commodity, and the funds from the certificate sales are divided between Colombian and U.S. rice industry groups. The American funds have been dedicated to research, to be divided among the U.S. rice-growing states, and Louisiana’s share will be more than $700,000 this year.

“We have to have an annual meeting every year,” said Jackie Loewer, rice farmer from Branch, who serves on the board that determines how the money is spent. “Last year the meeting was in Colombia, and this year we are returning the favor.”

In Louisiana, the group toured the Rice Research Station where the station’s director, Steve Linscombe, gave an overview of rice research in Louisiana that has been conducted for 104 years. “We are the oldest rice research facility in the western hemisphere,” Linscombe said.

He explained the breeding work at the station, along with hybrid rice development.

The Colombians asked several questions related to growing rice in Louisiana, many focused on common problems. One farmer said Colombian growers have a big problem with blank panicles, and Linscombe explained that the condition can be caused by excessive nighttime temperatures that cause plants to use energy for respiration instead of grain filling.

“We’ve benefitted from a lot of things you have done here,” he said. “Clearfield rice is one of those things, and I thank you for your help.”

Clearfield rice is a rice line developed at the Rice Research Station that is resistant to herbicides, so farmers can spray for weeds without hurting the rice.

Linscombe said the U.S. rice industry has benefitted from the relationship with Colombia also, sharing germplasm and solving problems cooperatively.

The group also toured the Zaunbrecher Brothers farm near Rayne before traveling to the Port of New Orleans. The Zaunbrechers showed the group several fields where rice and crawfish are grown together.