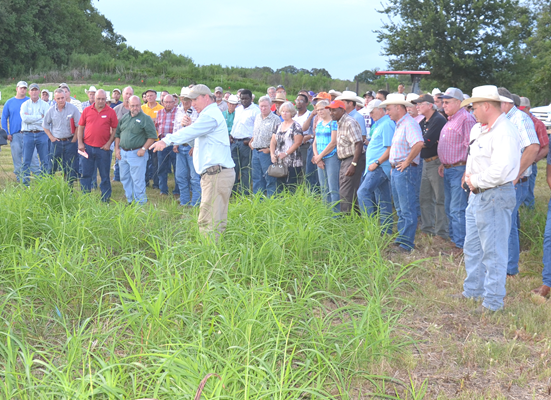 LSU AgCenter weed scientist Ron Strahan points to a clump of broomsedge in a test plot at the University of Louisiana at Lafayette’s Cade Farm. Strahan and Stan Dutile, LSU AgCenter county agent in Lafayette Parish, conducted a series of tests to determine the best way to control broomsedge in pasture. They revealed their results at a recent pasture field day at the ULL farm, attended by more than 100 people on Aug. 21, 2013. (Photo by Bruce Schultz) 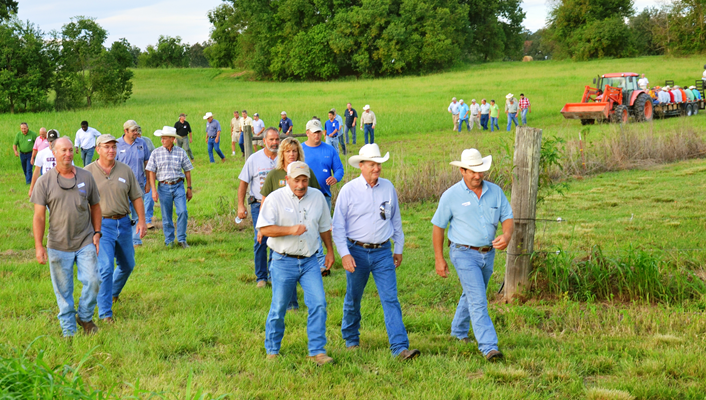 Participants at an LSU AgCenter pasture field day walk to the next stop on a field tour. Presentations included controlling briars, broomsedge and undesirable trees. More than 100 people attended the event held at the University of Louisiana at Lafayette’s Cade Farm on Aug. 21, 2013. (Photo by Bruce Schultz)

CADE, La. – Cattle prices should stay at the current level – or even increase – because of the expected decrease in beef production, an LSU AgCenter beef economist told cattle farmers on Aug. 21.

“It’s a good time to be in the cattle business,” Ross Pruitt said at the LSU AgCenter pasture field day held at the University of Louisiana at Lafayette’s Cade Farm.

Beef production this year is 2 to 2.5 percent less than in 2012, and projections call for 10 to 15 percent less beef to be on the market in the next two years, Pruitt said.

Corn prices have fallen and may stay in the range of $4.50 to 5.30 a bushel, he said, with relief for drought-stricken areas and projections of one of the best U.S. crops ever.

The other sessions of the field day dealt with coping with pests in pastures.

LSU AgCenter weed scientist Ron Strahan covered control measures for tallow trees. The trees, also called chicken trees, are easy to control with broadcast herbicide when they are less than 3 feet tall, but it is important to control large trees that are seed sources for pastures. He demonstrated the hack-and-squirt tree-control method on a large tree using an ax and the herbicide Tordon RTU.

Using products such as Tordon, Tordon RTU and Grazon P+D that contain picloram works best on larger trees, he said, but the active ingredient can also kill nearby trees because the herbicide may be exuded from the roots of treated tree. Using 2,4-D squirted into cuts into the bark had limited success.

Stan Dutile, LSU AgCenter county agent in Lafayette Parish, said Remedy mixed with diesel and applied to the trunk was effective at killing tallow trees without affecting nearby trees.

Strahan also covered control methods for broomsedge. Improving fertility combined with frequent mowing eventually controls the weed, he said. But several years are required to obtain results. Cattle will graze on broomsedge in the spring when the weed is more palatable.

Glyphosate herbicide applied in early spring can kill the weed, but it opens the ground for other weeds, such as itchgrass, to emerge, he said. Pastora herbicide provides no broomsedge control.

For smutgrass control, Twidwell said Velpar works well, but it is expensive and requires rain to be activated.

Fire ant control can be obtained by spreading bait over pastureland in staggered swaths, Brown said. Baits require more time than pesticides to have an effect because they are growth regulators that affect young ants.

Mounds should not be disturbed to prevent the queens from escaping, Brown said. Plowing provides some control by disturbing the mounds. “The more exposed to cold temperatures, the better you are going to do at controlling these mounds,” he said.

Baits can become rancid, so Brown advised against buying large amounts that will require long-term storage. Using tobacco products while preparing the bait can make it unappealing to ants.