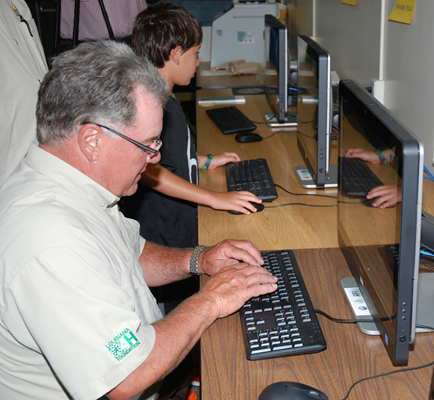 Retired LSU AgCenter vice-chancellor Dwight Landreneau and his grandson Hunter, check out the computers at the new training center dedication ceremony on Aug. 1 at the Grant Walker 4-H Educational Center in Pollock. (Photo by Johnny Morgan)

POLLOCK, La. – Central Louisiana residents will soon have access to the LSU AgCenter’s state-of-the-art computer training center that was dedicated on Aug. 1 at the Grant Walker 4-H Educational Center.

The center is seen as an opportunity to bring the connectivity of the internet to the people, said LSU AgCenter Chancellor Bill Richardson.

“If you’re not on the Internet, you’re really missing out. This is a chance to educate people.” Richardson said. “It’s a literacy project with some outstanding equipment.”

The center, which consists of 15 touch-screen computers and a printer, is financed by a $20,000 grant through the Louisiana Division of Administration-Office of Information Technology, Vincent said.

Once summer camps end for 4-H members, residents will be able to get computer training as individuals or as groups, according to camp director Christine Bergeron.

“I’ve already received four calls this week from people inquiring about the classes,” Bergeron said. “Some are from older people with limited or no computer skills, and other calls are from those who are interested for job-readiness skills.”

State Representative Terry Brown, Dist. 22, reflected on his time as a 4-H member at the camp and gave parallels between then and now.

“I remember when I came to camp, all we had was a radio sometimes and a record player for dances on some nights. And we went swimming in the creek,” Brown said. “So we’ve definitely come a long way.”

The Connect My Louisiana program began three years ago in 18 Louisiana parishes that were identified as underutilizing broadband technology, Vincent said.

“We started to offer educational classes on how to use computers and how to use technology,” Vincent said. “We’ve seen a larger adoption rate over the three years, but we needed a training center that was centrally located where we could bring people in and have hands-on training.”

Each week, both youth and adults will visit the facility to take advantage of computer courses that will range from basic computer literacy to advanced computer skills and social media, Bergeron said.

“Adding the computers will enhance our ability to teach certain techniques and classes with these young people and expose them to some things that they may not be exposed to in their local communities or schools,” Tassin said.

Grant Walker is an 80-acre facility located near Pollock on Highway 8 about 15 miles northeast of Alexandria.

The facilities at the center are available year-round for rental, Bergeron said.