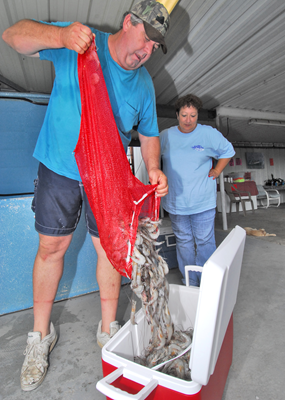 Al Granger pours fresh shrimp into a customer’s ice chest as his wife, Cheryl Granger, looks on. Cheryl Granger was in Cameron April 9 to explain how the online program, Delcambre Direct Seafood, helps connect her with customers to buy shrimp. (Click on image to open it, then right click to save. Photo by Bruce Schultz.)

CAMERON, La. – LSU AgCenter and Louisiana Sea Grant representatives met with a handful of shrimpers April 9 to tell them about ways to make more money.

Seafood dealer Cheryl Granger, of Vermilion Parish, said she has been using an online program called Delcambre Direct Seafood that allows her customers to place orders for shrimp using the Internet. Her husband, Al Granger, is a shrimper, and they sell his catch at their home near Maurice.

Before the program, she said she would call customers to let them know about the availability of shrimp her husband had caught. “Now, I never have to call a soul,” she said. “Right now, I have 10,000 pounds of shrimp ordered when the season opens.”

The personal contact with regular customers establishes a long-term relationship, Granger said. “When they leave, they know me, and they come back.”

LSU AgCenter marine extension agent Thomas Hymel said after one shrimper in Delcambre used Delcambre Direct successfully, acceptance among other shrimpers was immediate. “Within 30 days, almost every boat in Delcambre was signed up.”

Similar success stories are occurring where the online sales approach is being used in Lafourche and Terrebonne parishes, Hymel said. “It’s just been amazing what’s happened.”

Granger said before Delcambre Direct, she had to paint roadside signs to let the public know about her shrimp for sale at the start of a season. “I’m so happy I don’t have to paint those little signs anymore.”

Cameron shrimpers could use online sales, too she said. “I have lots of people from Lake Charles coming to me, but they need to come here.”

Shrimp nets should not be pulled for more than 2 hours in 80-degree water because the shrimp will die and begin to deteriorate, he said.

The brine freezing method retains quality, but shrimp cannot be overstuffed in sacks used to freeze the catch, he said.

He also said rinsing shrimp is a key quality requirement to remove grit and bacteria.