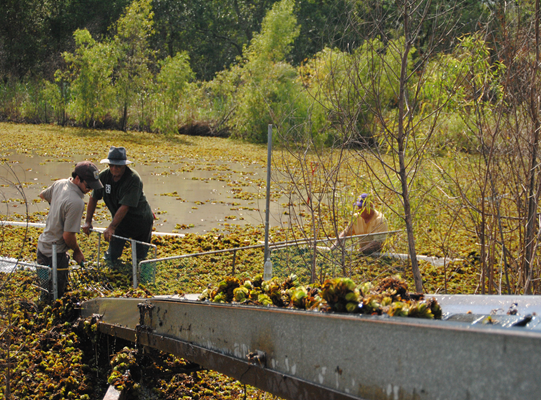 A crew with the LSU AgCenter, the U.S. Fish and Wildlife Service and the Louisiana Department of Wildlife and Fisheries loads weevil-infested giant salvinia onto a conveyor belt. (Click on image for downloadable photo.) Photo by Tobie Blanchard 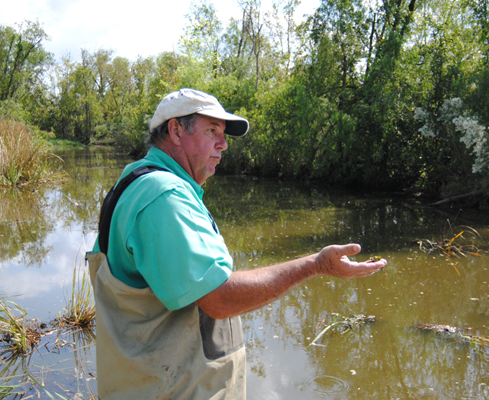 Dearl Sanders, LSU AgCenter weed scientist, holds the remnants of giant salvinia from a pond that was cleared of the aquatic weed. (Click on image for downloadable photo.) Photo by Tobie Blanchard 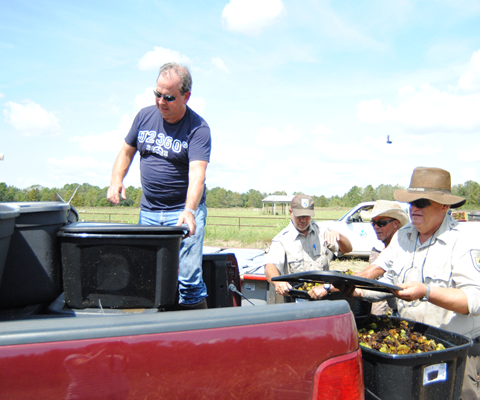 Kevin Couhig, left, loads his trucks with totes of giant salvinia. Couhig planned to release the salvinia in waterways on land he owns in Jeff Davis and Calcasieu parishes. (Click on image for downloadable photo.) Photo by Tobie Blanchard

HOUMA, La. – Dearl Sanders calls himself a bug chauffeur. The LSU AgCenter scientist is trying to move as many salvinia weevils as he can to combat the invasive aquatic plant giant salvinia, which is clogging waterways across Louisiana.

He was near here at Bayou Black working with crews from the U.S. Fish and Wildlife Service and the Louisiana Department of Wildlife and Fisheries to harvest and distribute the plant-eating weevils.

“You have to transport the entire plant infested with the weevils. That way you get the adult, the immature and the egg all at one time,” Sanders said.

The salvinia weevil was first released in Louisiana in 2007. Since then, it has successfully controlled giant salvinia in infested areas between Bayou Lafourche and the Mississippi River, Sanders said.

“Now, there is only a remnant population left, and that’s what we want,” Sanders said. “That way if any new giant salvinia floats in or gets brought in, then there are weevils to eat them.”

“I knew something had to be done to control the salvinia, so I offered this land for weevil ponds,” St. Martin said.

The weevil-infested salvinia is harvested by hand from the ponds and put into plastic storage totes. Sanders said one tote can hold about 40 to 50 pounds of salvinia. With 10 adult weevils per pound, each tote contains 400 to 500 adult weevils and about the same amount of eggs.

“It’s enough to establish a colony at a release site,” Sanders said.

The weevils harvested from this pond were given to state agencies, parish governments and corporate and private landowners free of charge for release into infested waterways.

Kevin Couhig drove from St. Francisville to pick up weevils. He planned to release them on land he owns in Jefferson Davis and Calcasieu parishes, where giant salvinia has become a major problem.

“It makes it very difficult for a number of reasons. One, the submerged aquatics don’t grow as well. Two, you can’t traverse the canals because the mats are just impossible for most motors to get through,” Couhig said.

Couhig uses part of his land for duck hunting, but the salvinia is closing up open waters and could affect the waterfowl.

“If you don’t treat it, eventually you are not going to have freshwater marsh where ducks want to rest over the winter,” he said.

Chad Courville with Miami Cooperation was taking a large trailer full of salvinia to land the company owns in Cameron Parish. He said the company plans to establish two culture ponds and to grow their own weevils to distribute to lessees of their land.

“We have a couple hundred acres infested with it, and we need to get started because it could get ahead of us before we know it,” Courville said.

Salvinia has been a problem in Louisiana for more than ten years. Weevil releases are part of a broader control strategy used by the Department of Wildlife and Fisheries.

“This is one part of what we are aiming toward, using every tool that we have in our tool box. We use herbicide control. We use biological control with the weevil. And we use mechanical control with our draw-downs and water fluctuations,” said Alex Perret, LDWF aquatic plant control coordinator.

Sanders plans to release a million more weevils from ponds in that area over the next two years.

The AgCenter’s weevil research is funded through a tax on boat trailers and a grant from the Louisiana Department of Wildlife and Fisheries.