LSU AgCenter horticulturist Ed Bush shows the benefits of growing smooth cordgrass in containers. He said root containment is one of the most important benefits.(Photo by Johnny Morgan. Click on photo for downloadable image.). 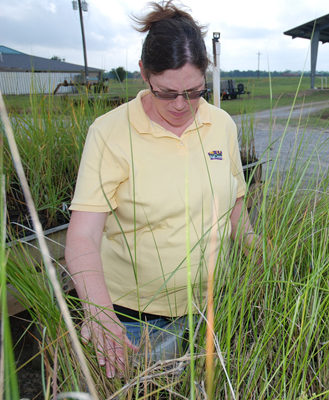 Plant producers, representatives from government agencies and private companies learned about the certification of wetland grasses at a field day at the LSU AgCenter Burden Center in Baton Rouge on April 24.


Participants heard results of the LSU AgCenter plant breeding program and how they could be involved in the certification and production process.

The certification project began in 1998 through collaboration with the U.S. Department of Agriculture’s Natural Resources Conservation Service in the collection and the evaluation process and is the first project of its type, said LSU AgCenter coastal plants breeder Carrie Knott.

To reduce erosion, smooth cordgrass plugs are planted in saline marsh restoration projects each year. In most cases, the only smooth cordgrass variety used is Vermilion, which was released by NRCS in 1989, Knott said.

Vermilion is adapted to Louisiana’s climate and as a result is used extensively in restoration projects throughout Louisiana, Knott said. “The problem with widespread use of only one smooth cordgrass variety is if one plant is susceptible to a particular stress – be it disease, insect or environmental – other plants will be susceptible to the same stress.”

The development of clonal varieties essentially involves the selection of superior lines and the maintenance of the identity of these lines. Rhizomes from plants in the wild that demonstrate desirable vegetative performance are collected and studied, Knott said.

“The clones are planted at various locations along Louisiana’s coast, and the vegetative performance of each clone is compared to Vermilion,” Knott said.

Vermilion is used as the standard for smooth cordgrass because it is the only released variety.

If the performance of the experimental clones is found to meet or exceed Vermilion, they will be retained within the breeding program and evaluated for their relatedness to Vermilion. If the experimental lines are found to be genetically different from Vermilion, or not very closely related, these clones will be considered for release to the public. Once clones are released to the public they are available to restoration practitioners for use in restoration projects.

Typically with any breeding program, it could take 10, 15 or 20 years from the first collection until a plant can be released to the producers, Knott said.

Knott presented performance data followed by a discussion on the deployment, significance and application of three varieties.

“Since there is so much diversity in smooth cordgrass in Louisiana, collection of the different populations was a monumental task,” said Knott. “The collection began in the fall of 1998. Then in the spring of 1999 the seeds were germinated, and we looked at thousands and thousands of seedlings and lines.”

From those collections, the numbers was whittled down to the six that are being released.

Leroy Kennair, owner of Kennair’s Nursery, LLC came from Plaquemines Parish to get more information about growing these plants as part of his business.

“In order to grow a product and make a profit, you have to know what the base price is of your investment,” he said. “Things may look good on paper, but it may not be practical.”

As part of the field day, participants were given a tour of the smooth cordgrass nursery where LSU AgCenter weed management specialist Eric Webster showed how irrigation and other systems work to produce the varieties that are being released.