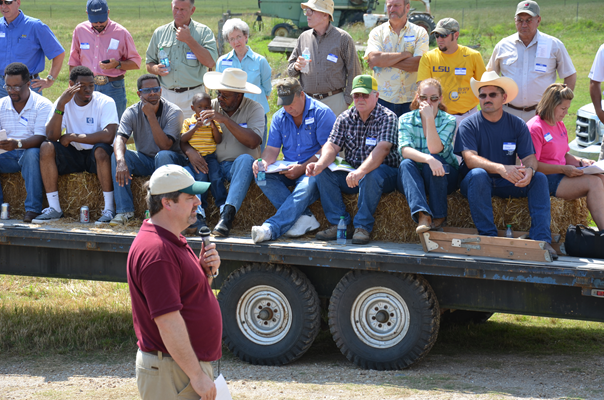 Jim Griffin, LSU AgCenter weed scientist, tells cattle producers about the necessity to use the correct nozzles and to calibrate nozzles to ensure proper herbicide coverage on pastures. (Photo by Bruce Schultz) 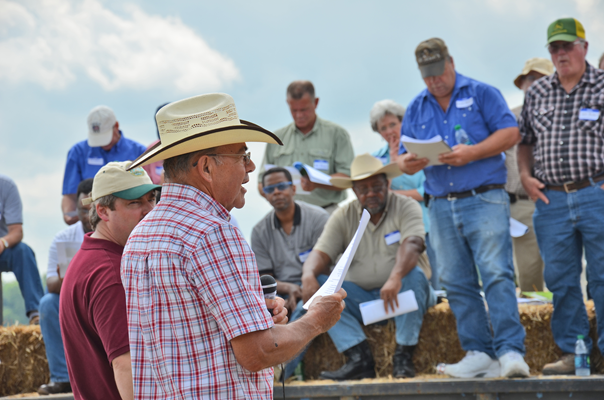 JEANERETTE, La. – Cattle producers attending a field day at the LSU AgCenter Iberia Research Station on May 5 heard about the advantages and challenges of raising forage-fed cattle.

Jeff Gillespie, LSU AgCenter economist, said grass-fed cattle in Louisiana are usually sold to individuals who want to buy local beef. Gillespie presented the economic data of the first two years of a research project in which Guillermo Scaglia, LSU AgCenter ruminant nutritionist, is evaluating different forage systems to produce forage-fed beef. Fifty-four steers divided in nine groups grazed different combinations of forages at a stocking rate of 2.5 head per acre. Gillespie said that the average return so far is $1,047 to $1,028 per steer, with a return of $269 to $486 after costs not including land, labor and management.

Scaglia said the average daily gain during the past winter was 2.8-3.3 pounds, and the average weights taken of the nine groups on April 27 ranged from 980 to 1,114 pounds per head.

“If they gain that much, you can expect to have good beef,” Scaglia said. “The range in weights of individual steers goes from 930 to 1350 pounds.”

Scaglia said beef from the study groups has been low in fat and marbling, with an acceptable ribeye size.

“Forage-fed beef is high in beneficial fatty acids and omega 6 to omega 3 ratio,” Scaglia said, adding that this project will also study if consumers find differences between frozen and fresh forage-fed beef.

“One of the worst things you can do is to apply urea fertilizer right after a rain,” Alison said, adding that nitrogen in urea will be readily converted to the ammonia form and volatilize when the soil surface is moist.

Ross Pruitt, LSU AgCenter extension livestock economist, discussed the importance of knowing your operation’s historical cost of gain for stocker programs. The value of that forage-based gain has increased in recent years, which increases the potential returns for stocker programs. But managing your risk is critical to ensuring positive returns, he said.

He said his ranch is divided into 31 pastures, and he uses intensive grazing management, which means cattle are moved frequently.

“When in doubt, move the cattle to a new paddock,” Gonsoulin said, adding that it’s important to learn which forages are suited for a producer’s soil. He said he relies on common bermudagrass, clovers and ryegrass, but he is trying other forages including gammagrass and sorghum-sudan. He said he has his hay analyzed to make sure it is high-quality feed.

Gonsoulin commended Scaglia on his research. “It is much needed, and it is much appreciated.”

Jim Griffin, LSU AgCenter weed scientist, showed producers the effects of different spray nozzles. He said it’s essential to test and calibrate nozzles to make sure the correct amount of chemical is being applied uniformly on pastures.

Also at the field day the graduates of the 2011 class of the LSU AgCenter Master Cattle Producer program were recognized.