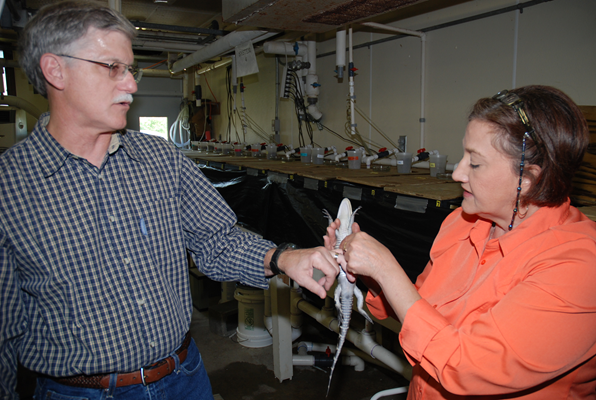 Robert Reigh, resident director of the LSU AgCenter Aquaculture Research Station, shows aquatic animal nutrition scientist Millie Williams the most used parts of the alligator’s skin. This alligator and others it’s size are part of nutrition studies at the station designed to reduce feed cost for alligator farmers. (Photo by Johnny Morgan. Click on photo for downloadable image.)

Alligator farmers could grow bigger alligators faster and with less cost based on feeding studies conducted at the LSU AgCenter Aquaculture Research Station.

Until about three years ago, crawfish, catfish and several other fish were the main research projects at the station, said station director Robert Reigh.

“We agreed to do some studies with small alligators through a grant from wildlife and fisheries to look at different feed mixtures as a way to help the farmers to keep their costs down,” he said.

The feed the growers use is expensive, so the different mixtures being tested will explain what adjustments can be made to decrease their operating costs, he said.

The station can deal with smaller gators and conduct studies until they grew to about three feet. At that time they are returned to the wild, Reigh said.

When the alligators hatch each fall, wildlife and fisheries agents collect them and provide enough for the nutrition studies.

“When we get them, they are about a month old,” Reigh said. “At that point, they are almost identical in size, weighing within about a gram of each other.”

At this early age, they are easy to handle and space is not as much an issue as when they get to 3-4 feet.

Hatchlings are fed different mixtures and amounts of feed to see if it causes any difference in their growth rates. The feed mixtures contains varying amounts of fish meal and grains, with some including cellulose to determine if it has any effect on digestibility.

“We are interested in the digestibility of the various feeds, which have a 57 percent protein content,” Reigh said.

Feeding alligators is quite a bit different than other animals. “If you’re feeding a cow, or horse or dog, you’re feeding them a lot of energy, relative to the amount of protein you’re giving them,” Reigh said. “It’s different with aquatic animals because they have very low energy requirements.”

In cool temperatures alligator grow slowly because they are not requiring much energy, but as the temperature increases, they will grow at a faster rate, he said.

At the research station, the temperature is kept at a constant 90 degrees, and the alligators are fed every day.

While alligator meat continues to be in high demand, producers are mostly interested in the skin quality. With that in mind, the growers are extremely interested in nutrition and disease because both have an effect, Reigh said.

Since the alligators are grown in controlled conditions, the scientists have the ability to look at nutrition, water quality and temperature as determinants of growth.

“If you took two alligators from the same clutch of identical size and allowed one to remain in the wild and brought the other into a controlled environment, after a year their growth would be dramatically different,” Reigh said. “First, the one in the wild doesn’t eat as much, and second, it’s subjected to whatever the outside temperature is, which will be unfavorable at some time of the year.”

With the downturn in the economy, the alligator industry has suffered in Louisiana over the past few years, but it is on the upswing now, according to LSU AgCenter vice chancellor for research Phil Elzer.

“I would say that the number of growers is somewhere between six and eight now, which is down from about 25,” Elzer said.

According to the Louisiana Agriculture Summary, in 2011 there was a nearly 55 percent reduction in the number of animals harvested, but estimated value of the harvest was approximately 34 percent higher than the previous year. This was due in part to the increased prices for hides that resulted from decreased supplies in the market.