Here’s why crape myrtles may not bloom 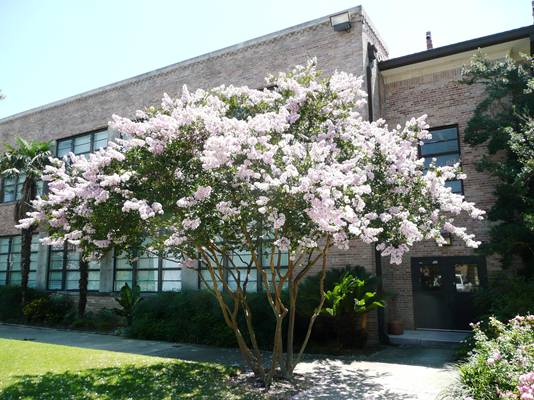 Beautifully shaped and blooming Yuma crape myrtle in front of J.C. Miller Hall on the LSU campus in Baton Rouge. (Photo by Allen Owings. Click on photo for downloadable image.)

What’s the most popular summer-blooming tree in Louisiana? Crape myrtles. Pretty easy question. Louisianians plant many crape myrtles in their landscapes every year. The lovely, long-lasting blooms make them attractive.

Most years, crape myrtles start blooming between mid-May and early June. Flowering continues for 90-120 days depending on the variety.

You may sometimes see crape myrtles not blooming well. “Why?” you might ask. Here are some factors to consider:

– New growth. How much new growth did your crape myrtles have this spring? Crape myrtles need to have new growth each spring in order to produce summer flowers. These flowers come on current-season growth, so late winter/early spring fertilization can aid crape myrtle flowering in the summer. It is not too late to fertilize this year if you haven’t yet.

– Variety. Some varieties don’t flower as vigorously as others. Hybrid crape myrtles usually flower first. Natchez, Tuscarora, Basham’s Party Pink and Muskogee are the easiest-flowering varieties. The semi-dwarf varieties such as Tonto, Acoma and Sioux follow a week or two later.

– Insects. Heavy infestations of aphids decrease flowering. This is the most common insect problem on crape myrtles. Ever feel like you’re being “rained” on under the canopy of a crape myrtle? That “rain” is actually bodily fluid being excreted from aphids. White flies and other insect also can cause problems for crape myrtles.

– Too much fertilizer. Excessive fertilization, especially high amounts of nitrogen, in conjunction with other factors, primarily improper pruning, can eliminate or delay flowering.

– Leaf spot. Foliar diseases decrease plant vigor and flowering, especially in the absence of new growth in spring. The main cause of leaf spot in crape myrtles is the fungus Cercospora, and it’s bad this year. Long term, this disease is not detrimental to the plant. Using fungicides for control has not been very effective because they would have to be applied repeatedly throughout the growing season, and getting adequate coverage on larger trees is difficult.

Visit LaHouse in Baton Rouge to see sustainable landscape practices in action. The home and landscape resource center is near the intersection of Burbank Drive and Nicholson Drive (Louisiana Highway 30) in Baton Rouge, across the street from the LSU baseball stadium. For more information, go to www.lsuagcenter.com/lahouse or www.lsuagcenter.com/lyn.