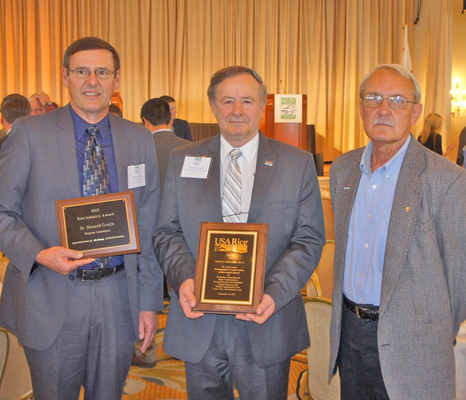 Both men were recognized on Dec. 10 at the conference organized by the USA Rice Federation.

Groth told the USA Rice membership that his work would not be possible without the support of county agents, research associates, farmers and his wife, Babs. “Without them over the years, I wouldn’t have accomplished much.”

He said working with other researchers helps advance science and assists agricultural producers.

Girouard said rice fields maintained by farmers are providing an important wildlife habitat. “No other commodity can provide that.”

“Dr. Groth has aided producers in their fight against rice diseases, helping them obtain new fungicides and advising them on disease strategies,” Linscombe said. “He keeps the LSU AgCenter in the forefront of rice research nationally and internationally.”

The awards are sponsored by Rice Farming magazine, Horizon Ag and the USA Rice Federation.

Also honored was a Jefferson Davis Parish student, Paige Granger, of Hathaway, who won a $4,000 scholarship for her rice campaign. She is the daughter of Glenda and Randy Granger and a student at Hathaway High School. She works on a rice farm run by her uncle, Ricky Crochet.

She plans to use the money for her agriculture education at McNeese State University.

Granger said her campaign involved numerous activities, including an essay, promoting rice at schools, a photo contest and talking with home economics classes.

“She did as much as you can do to put out the word,” her mother said. “It was all done the month of September, and she had projects every day.”

The scholarship program is sponsored by USA Rice Federation and Dow AgroScience.

Rice farmer John Compton of Jefferson Davis Parish was one of seven men chosen for the USA Rice Leadership Class. The class will tour the U.S. rice growing regions and visit several agriculture facilities, including the AgCenter Rice Station. This is the 24th class, all led by Chuck Wilson, of Arkansas, who was recognized for his 35 years of work with the program.

The issue of quality was a major topic at the conference. Speakers identified chalkiness in rice as a concern that has drawn the attention of key buyers in Mexico and Central America.

Jonathon Hobbs, representing the grain shipper Russell Marine, said chalky rice isn’t as fluffy and it tends to clump. “Nicaragua by far is the most sensitive to this.”

He said Nicaraguans have preferred U.S. rice. “However, in the past two years, the quality and appearance have really gone downhill.”

Marvin Lehrer, USA Rice trade representative, said Mexico, the largest market for U.S. rice, is not as stringent as Nicaragua. But, he said, Mexican rice buyers have the option of buying from Pakistan, Vietnam and Uruguay.

Linscombe said chalk is determined by genetics and environment, adding that weather can play a role in how starch cells are formed in a rice grain.

Linscombe said American rice is generally high in quality, but it is made inferior when lesser quality rice is comingled with superior rice.

The LSU AgCenter has been participating with a quality task force conducting a quality study with other universities. Rice has been grown at six Southern locations over two planting dates, including the Rice Research Station at Crowley, then milled by the Louisiana Rice Mill at Crowley for evaluation across the United States. Rice grown in Missouri had the highest quality score, followed by the Crowley location. At the bottom was Mississippi.

Langley said crop insurance proposals in the farm bill include compensation for farmers who have extra costs of harvesting downed or lodged rice.