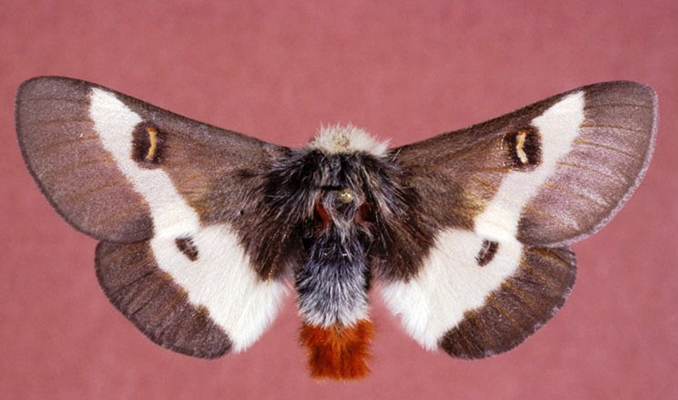 So AgCenter entomologists are issuing a “heads up” now so people can be prepared when the caterpillars appear.

“Within the last month, a number of students have been bringing in medium- to large-sized moths that are beautifully colored in whites and blacks with a red rump,” said LSU AgCenter entomologist Gregg Henderson. “This is the dreaded buck moth that as an adult feeds little to not at all and mainly lays eggs in our beautiful live oaks for the next generation to start munching as a not-so-beautiful caterpillar.”

Large numbers of moths mean only one thing, Henderson said. “Next spring we may have a major outbreak of caterpillars.”

Reports by New Orleans residents suggest the buck moth appears to be poised to present a major problem in spring there as well.

Unlike most moths, buck moths fly during daylight, making the brightly colored critters easy to spot. In addition, Baton Rouge area homeowners even have reported them in their houses. But there’s not much to do now.

While the moths themselves don’t present any particular problem, females are laying eggs.

“Their favorite spot is in oak trees, where they lay eggs in a circle around small stems,” Henderson said. “Larvae will begin to hatch in March and April. They will stay in small groups for a while, then disperse when they become larger.”

The caterpillars become a problem when they fall from the trees and drop to the ground to pupate in the soil. “That’s when they’re on the move and most dangerous,” Henderson said.

The larvae or caterpillars are easier to treat when they’re smaller and still in trees, so people should be on the lookout for them early and be prepared to treat them when they appear.

The good news is that several tree treatments are very effective in killing buck moths, but they usually require that the caterpillars be actively feeding before application of a treatment, Henderson said. In addition, although a live oak can almost be completely defoliated by a large infestation, the tree quickly recovers and little harm is done.

General treatment is to spray trees with a pesticide containing Bt, or Bacillus thuringiensis – naturally occurring bacteria that are effective against buck moth caterpillars.

Other chemicals also are available, Henderson said. And commercial pest control can cost as much as $200 per tree.

In the end, however, no one knows what spring will bring, Henderson said. Natural controls, such as viruses and tachinid flies, which are parasitic to buck moths, could appear and lessen any infestation.