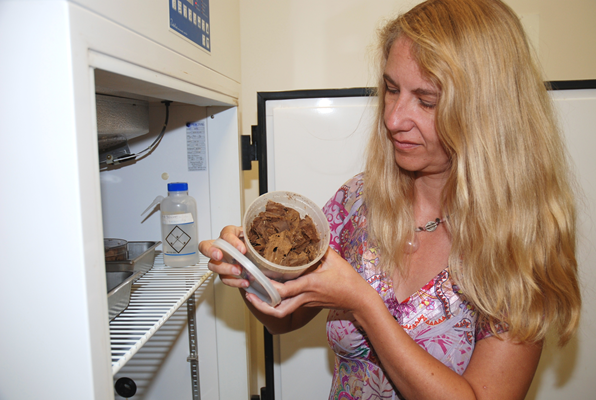 Scientists have found that hiding a toxin within yeast and cellulose powder bait holds promise in destroying termite colonies.

Using a method called paratransgenesis, which is the use of genetically engineered microbes to deliver and spread toxins in target organisms, LSU AgCenter entomologist Claudia Husseneder said this technology may be useful in the control of numerous insects in the future.

“I began this research while working in Hawaii,” she said. “At the time, we engineered bacteria to make them glow and fed them to termites to watch them spread throughout termite colonies. When I came to the LSU AgCenter in 2003, I found scientists working with toxins that we could engineer into microorganisms to actually kill termites.”

This provided the perfect opportunity to put a theory into practice. Husseneder engineered yeast as the “Trojan horse” to produce the toxins and spread them in termite colonies. The yeast can be freeze-dried and made into a bait that termites love to eat.

It’s called a Trojan horse because the control agent is hidden within the yeast, which is not recognized as a threat by the termites and is rapidly ingested and transferred to other termites in the colony, she said.

There are no chemicals. The toxin is actually a peptide that is safe for animals and humans. It is produced by the yeast that multiplies within the termite gut and is spread throughout the colony.

“Termites are social insects. They feed and groom each other, so they spread the bait easily,” Husseneder said. It is important to kill the entire colony, including the queen, because the queen can lay hundreds of eggs and quickly replace losses in the worker force.

“People want biological control, but normally biological control doesn’t work very well with social insects like termites,” Husseneder said. “Termites have lived in the ground for millions of years, so they know how to deal with germs, and they even separate their sick, so they do a good job of protecting themselves from diseases.”

For years scientists have looked for safe, effective methods to kill them.

To make biological control work, this research uses microbes that were enhanced to produce a strong toxin that is unlikely to ever cause resistance. Since the microbes in their natural state are not a threat, the termites immune system and hygienic behavior are not activated.

“What we do is genetically engineer microbes so they express toxins and spread them throughout the colony – just like the Greek soldiers into Troy – to destroy the city from within,” she said.

Termites eat the microbe bait, and by social interaction they spread the still-living microbe throughout the colony.

Because the microbe is a living organism, it actually multiplies while in the termite gut instead of diluting when spread from termite to termite.

“In order to make the product targeted and safe, we designed a ligand that attaches the toxin to the protozoa inside the termite gut known to help the termite digest wood,” she said. “Without these protozoa, the termites will die of starvation.”

Safety steps have been built into the product to make sure that it’s specific to termites, Husseneder said. Future studies of this type will customize the product for use against other pests, such as roaches and fire ants.

The next step in this research is to secure funding so the efficacy of the bait product can be tested in a greenhouse, Husseneder said. “It has to go through further testing and the permitting stage before it will be ready for commercial use. This could take three years or more.”