Students give thumbs up for local products in school taste test 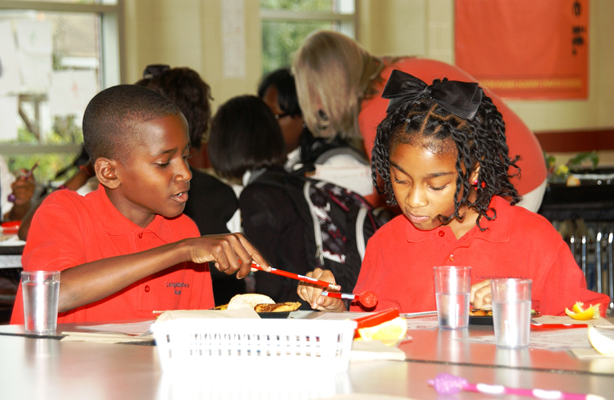 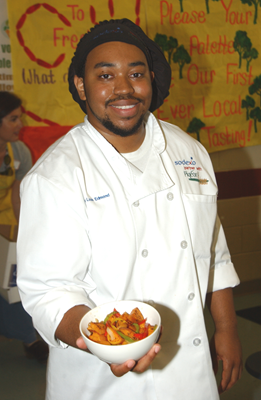 Louis Edmond, district chef for schools with Sodexo in New Orleans, displays sautéed sweet potatoes he prepared for a taste test of Louisiana products for students at Langston Hughes Academy. The school is operated by FirstLine Schools, and Sodexo is the food service contractor. (Photo by Rick Bogren. Click on photo for downloadable image.) 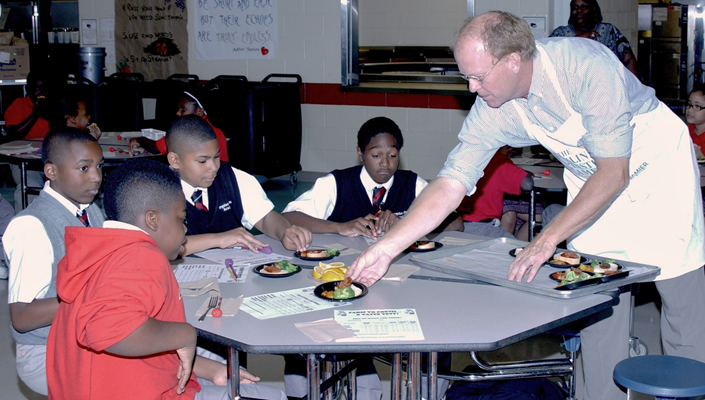 “We want to try to match Louisiana producers with schools around the state,” said Pam Hodson, LSU AgCenter public relations and information specialist. “If we can help farmers find markets and schools identify local sources for their food, everybody comes out ahead.”

The Langston Hughes test was the first of several Hodson plans to conduct throughout Louisiana.

The test got its start when Hodson contacted FirstLine Schools, which operates Langston Hughes along with four other New Orleans charter schools – one high school and four K-8 schools. She said the response she received was positive.

“This study looks at getting more local products and the barriers to get them into the schools,” said Chris Van Vliet, director of food service for FirstLine Schools. “Local means Louisiana.”

In addition to finding the products, they have to be acceptable to students, Van Vliet said. “Has the student ever seen it before – or will ever see it again. That’s the basis for the taste tests.”

The foods were prepared in the Langston Hughes kitchen by Chef Louis Edmond, district chef for about 10 schools with Sodexo, which has the contract for providing kitchen and dining services to FirstLine Schools.

For the taste tests, Edmond prepared sautéed sweet potatoes with oven roasted bell peppers, sautéed andouille, sautéed broccoli, sweet potato pancakes and orange wedges. All food used in the test was donated, and as they ate, the students scored their preferences.

“The score cards showed acceptance on all products – and the students asked and received seconds,” Van Vliet said. “Now the next step of the project is studying the feasibility of utilizing the products tested in FirstLine Schools menu.”

The schools operate under guidelines from the U.S. Department of Agriculture, Van Vliet said. The federal program for free lunch pays $2.79 per meal, including labor food, supplies and overhead. This allows about $1.50 to cover the cost of the food itself.

“Food cost is a challenge, but increased student meal participation and food acceptance is the optimum goal,” Van Vliet said.

As part of its nutrition education efforts, FirstLine Schools conducts the Edible School Yard, which Van Vliet said is a factor in school nutrition reform.