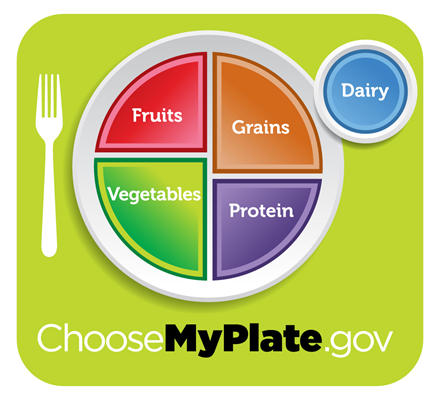 The new MyPlate logo is purposely colorful to encourage people to eat a more colorful diet with lots of fruits and vegetables.

The plan, dubbed MyPlate, is for one meal and replaces MyPyramid, which had an intricate guide for a whole day’s consumption.

“The pyramid plan had too much information. People saw all that food per day and thought they couldn’t eat that much – when, in fact, they could,” Roy said. “In MyPlate people can focus on one meal at a time.”

In the MyPlate logo a fourth of the bigger circle is fruit; another fourth, vegetables. The other half of the circle is divided between a food high in protein, such as meat or beans, and a grain product, such as rice or pasta.

The new recommendation is that half the grain products eaten be whole-grain. That means trying to incorporate brown rice and whole-grain breads, for example, into your diet. Whole-grain products are a good source of added fiber to the diet, which helps lower cholesterol.

To the side of the plate is a smaller circle that could represent a beverage, and it’s labeled “dairy.” This could mean drinking a glass of low-fat milk – or somehow making sure you incorporate a calcium-rich food with your meal, Roy said.

The food plan includes a recommendation for soy-based beverages. These are high in calcium – plus digestible by people who are lactose-intolerant, Roy said.

The MyPlate logo is colorful for a reason.

“People need to think color when they plan a meal,” Roy said. “There should be lots of color, which you get from fruits and vegetables.”

“These colorful foods are the foods rich in vitamins and minerals, which help protect against heart disease and cancer. They’re also high in fiber, which is good for the digestive tract,” Roy said.

Colorful foods tend to be more expensive, however, than more neutral-colored foods.

“The best way to get bargains is to grow your own food and shop at farmers markets,” Roy said. “Buy fruits and vegetables when they’re in season and at their cheapest.”

“This is hard to do unless you prepare your own foods from scratch,” Roy said. “People are encouraged to eat more homemade meals and learn healthful cooking skills.”

Off-the-shelf processed foods and restaurant food tend to be high in salt and sugar, which makes it almost impossible to eat based on the Dietary Guidelines.

“It takes three to seven sessions, but people can adapt their taste and learn to enjoy new, more nutritious foods,” Roy said.

The USDA has made it easy for people to learn about the new recommendations at www.choosemyplate.gov.

“The site includes recipes, which makes it easier for people to change their eating habits,” Roy said.