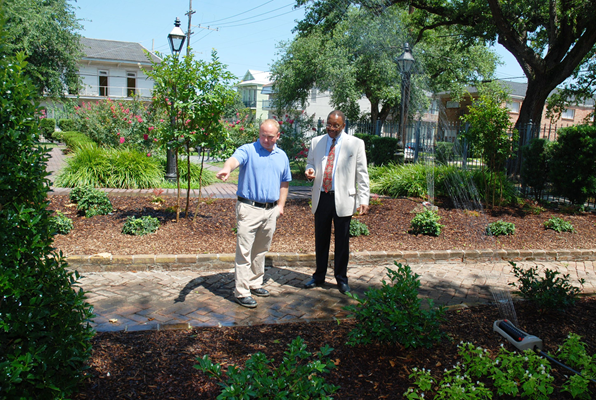 The LSU AgCenter is working with the New Orleans African American Museum to establish their landscape.

Russell Harris, LSU AgCenter horticulture agent in New Orleans, has begun what he considers a long-term project that will coincide with improvements taking place at the museum on Governor Nicholls St.

“I was asked to look at the existing landscape plans the museum had developed and we decided to change the approach and be a little creative,” Harris said.

Harris and a group of volunteers began the project by removing weeds that had taken over the grounds, so he had an idea of where they needed to start. Then they had to make the best choice of plants for the area.

“The original thinking was to put in plants that would have been brought here by Haitians slaves and slaves from other Caribbean countries,” Harris said. “But we decided against that idea since there are newer varieties of plants that would perform better at the location.”

The plants originally planned for the museum entrance included bananas, sugarcane and cotton.

Some of those crops would not do well during cold weather, according to Harris, who then decided to use them on other areas of the museum grounds.

“I worked with a group of Boy Scouts to remove the weeds and get the grounds prepared, then I came back with volunteers from Capitol One Bank to actually do the planting,” Harris said.

This is just the beginning of the project, according to museum director John Hankins. Harris is currently developing the plans to landscape the entire museum grounds.

“Three weeks ago this was a jungle,” Hankins said. “People would come by and say, ‘John this has such great potential’. Now they say, ‘this is beautiful’.”

The plan for the museum landscape project is to make the building a focal point, Harris said. “The plants that we’ve put in are designed to draw the eye in to the museum from the street.”

Most of the plants are perennials and woody plants that will bloom throughout the year, providing constant color, with a small area of annuals that will be changed out seasonally.

“In this landscape, we have used some of the Louisiana Super Plants, which perform very well in trials done by the LSU AgCenter,” Harris said.

The museum is located at 1418 Gov. Nicholls Street in a mansion that was built in 1828 in the Treme area of New Orleans. Before the Civil War, the area was said to be the largest and most important community of free people of color in the country, according to Hankins.

“At that museum the layout plan is different,” Harris said. “At that museum, we are actually using their plants, which include herbs that have medicinal value.”

The African American Museum recently received a $3 million federal grant to renovate buildings on the property that will be used not only for display but as a training site for students.