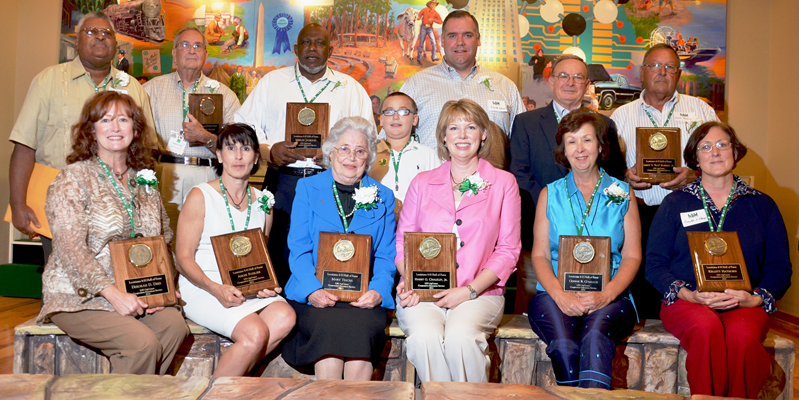 Individuals recognized in the 4-H Hall of Fame have received the highest award given by the LSU AgCenter, said Paul Coreil, LSU AgCenter vice chancellor for extension.

With Saturday’s ceremony, 136 individuals have now been recognized, and their biographies and photos are included in a permanent exhibit at the museum.

“We make a difference, and that’s why 4-H is more than 100 years old, and it’s going to be around for a long time,” Coreil said.

A strong 4-H program will continue despite the LSU AgCenter’s budget problems, he added. “The 4-H program is our highest priority.”

Louisiana leads the nation in childhood obesity, and the 4-H healthy living initiatives program can help educate youth, Coreil said. “We need 4-H now more than ever. We’re going to bring in the kids who never heard of 4-H.”

At the ceremony, many of the inductees said 4-H played an important part during their formative years.

“4-H was an integral part of my life,” said Mary Leach Werner, whose deceased great uncle, Harry G. Chalkley Jr., was among those honored Saturday. She attended the ceremony with her brother, Claude Leach Jr., and his son, Jackson Leach, to receive Chalkley’s award.

Chalkley served as a 4-H volunteer, philanthropist and business leader in Calcasieu Parish for more than 25 years.

Honoree Connie B. Comeaux said her work with 4-H started 50 years ago as a fifth grader. “This organization has touched countless lives,” said Comeaux, who has served Iberia Parish more than 25 years in numerous volunteer roles.

James Dardeau, retired from the LSU AgCenter, said he never would have attended LSU as an animal science major if he hadn’t been involved with 4-H as a child. He was a 4-H county agent in Cameron, Natchitoches and Vermilion parishes.

Deborah Dees of DeSoto Parish said she realizes the benefits of working with 4-H students. “They inspire me. You don’t realize how much those children work. It’s amazing what those children learn.”

Even after her children were out of school, Dees remained active as a volunteer and 4-H Foundation committee member, a 4-H Exchange Trip host and an advocate for securing local government support for the LSU AgCenter.

Angie Fusilier, of Evangeline Parish, said she works as an adult volunteer because “it’s the right thing to do. I really do feel bad for people who don’t volunteer and get to touch people’s lives.”

Fusilier’s expertise as a leader has been used on advisory committees and to train parish 4-H community service officers.

Merlin Jackson, of St. Charles Parish, said he became a 4-H leader when his school principal picked him, even though he knew little about the organization.

Jackson served as a 4-H organizational leader at St. Rose Elementary for 32 years. He also served on the parish 4-H advisory committee and was the first president of the St. Charles 4-H Foundation.

Oscar Pedescleaux, husband of Catherine Pedescleaux of St. John the Baptist Parish, said his late wife enjoyed volunteering to help 4-H students. During her 29 years of service as a 4-H leader and teacher at West St. John Elementary School, she worked with more than 2,500 students.

“He helped hundreds of kids for more than 50 years,” Louis Robbins said. He said his father began volunteering as a parent interested in the sheep project.

Honoree Mary Triche, of St. Charles Parish, brought the house down with her memories of 4-H from 1949. She said she first went to summer camp because her 4-H agent recognized she needed help with cooking. “I baked the worst cherry and apple pies there ever were.”

Triche has been a volunteer in St. Charles Parish for 32 years as leader of the 4-H Junior Leader Club and six years as an organizational leader for the Sacred Heart of Jesus Club.

Another honoree, Steven Young, a teacher and 4-H leader, said the principles taught in 4-H are vital for successful adulthood.

“We try to teach youth responsibility and things they need for life,” he said. “Let’s never give up preparing our young people for the future.”

For more than 50 years, Young served Bienville Parish as a 4-H organizational and project leader. He trained numerous youth in the poultry and the dairy projects to judge, groom and show poultry and dairy animals.

Annette Sharp, daughter of honoree Kellett Hathorn of St. Tammany Parish, presented the 4-H museum with a wall map of a trail that was named for her father at Camp Grant Walker. Hathorn served as a 4-H agent in St. Tammany Parish for five years and as a state 4-H specialist for the rest of his 33-year career. He was nationally recognized as a summer camp authority.

To learn more about previous years’ inductees to the Louisiana 4-H Hall of Fame, visit www.lsuagcenter.com/4hmuseum.