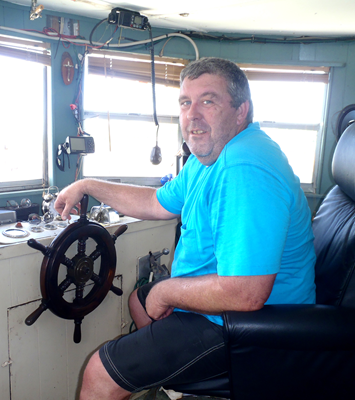 Shrimper Albert Granger of Maurice in the pilothouse of his shrimpboat, the Miss Brittany G. Granger and his wife, Cheryl Granger, use the Delcambre Direct Seafood website to help sell their catch directly to consumers. (Photo by Bruce Schultz) (Click on photos to download larger image.) 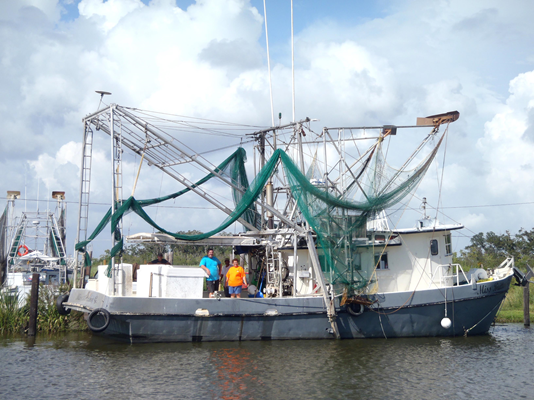 The shrimpboat Miss Brittany G. at the Port of Delcambre after a four-day trip. (Photo by Bruce Schultz) 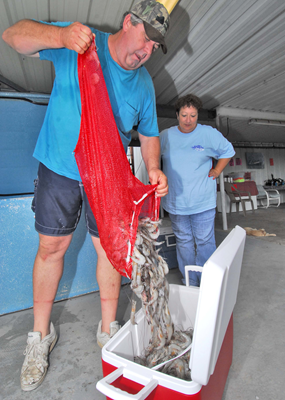 Albert Granger pours shrimp he caught in Vermilion Bay for a customer as his wife, Cheryl Granger, watches. (Photo by Bruce Schultz)

Shrimpers are benefiting from a direct-sales method using the Internet to announce when they will be coming ashore with a fresh catch.

The Twin Parish Port Commission – along with the LSU AgCenter and Sea Grant – has created a marketplace, Delcambre Direct Seafood, where consumers are able to contact seafood producers (fishers) directly to purchase fresh shrimp and other seafood when they arrive at the dock.

“For anybody looking for fresh shrimp, it’s a good way to check on availability,” said LSU AgCenter fisheries agent Mark Shirley. “They can contact the shrimper, so they know they are getting fresh shrimp of good quality.”

A website, www.portofdelcambre.com, has a list of 16 fishers in the Delcambre, Intracoastal City and Vermilion Bay area who catch shrimp, crabs, fish, oysters and crawfish. The website provides information on what is being caught, when the boat will be returning to port and how customers can contact the fishers, according to Tom Hymel, LSU AgCenter fisheries agent.

“Buyers can place their orders before fishermen return to the dock. Customers can also register to have an e-mail sent to them notifying them when shrimp are available,” Hymel said. “From what we can see, the website is providing a boost to the business, and buyers are getting quality, fresh seafood at a good price.”

Hymel said the fishers are from the Acadiana region.

“Some even come from Terrebonne and Cameron parishes to fish out of Delcambre,” Hymel said. “We also plan to encourage crabbers and other types of fishermen to take advantage of the direct marketing opportunities in our region through the Delcambre Direct Seafood program.”

Albert and Cheryl Granger of Maurice use the system, and they say it has helped their 17-year shrimp business.

“We’ve been selling all our shrimp, so I guess it’s working,” said Albert Granger, who catches the shrimp, along with a few crabs.

“The website has helped us a lot,” said Cheryl Granger, who makes the sales.

She said the Internet sales method have brought a younger clientele.

Before the season started it was uncertain whether loyal customers would continue to buy their shrimp because of the BP oil catastrophe, she said. “We were pretty scared at the beginning.”

The oil spill occurred in the southeast coast, and none of it spread as far west as Vermilion Bay and the nearby Gulf waters where the Grangers’ shrimp are caught.

Cheryl Granger said she made an extra effort to get the word out that her husband was catching quality shrimp. “This year I spent more on advertising than ever before.”

She even had T-shirts made for Granger Seafood.

The morning after Albert Granger returned to the Port of Delcambre with a load of shrimp, the demand was obvious with a steady stream of customers. Some were new, and some have been buying for years.

Mike Hebert of Ragley drove more than 90 miles to buy 100 pounds. He said he couldn’t find any shrimp in the Cameron area, so he surfed the Internet and found the Port of Delcambre website.

“I was digging around on the Internet, and I came up with this,” Hebert said. “That makes it super easy, especially where I live.”

He said he will freeze the shrimp and eat a few pounds at a time. “This might take us past winter.”

Mike Mouton of Lafayette bought 100 pounds, and he was planning to ship much of it to his children in Texas and California.

Velma Domec of Lafayette said she had 25 pounds in the freezer, but she bought an additional 10 pounds. “I’m so glad I got some shrimp.”

Albert Granger was planning to go back out on his boat, the Miss Brittany G., in a couple of days, but he was not encouraged by approaching cool weather, which could push the shrimp farther out into the Gulf. In case the catch is good, his wife was already taking orders.

“The best thing is to call me and get on the list,” she advised a potential customer over the telephone.