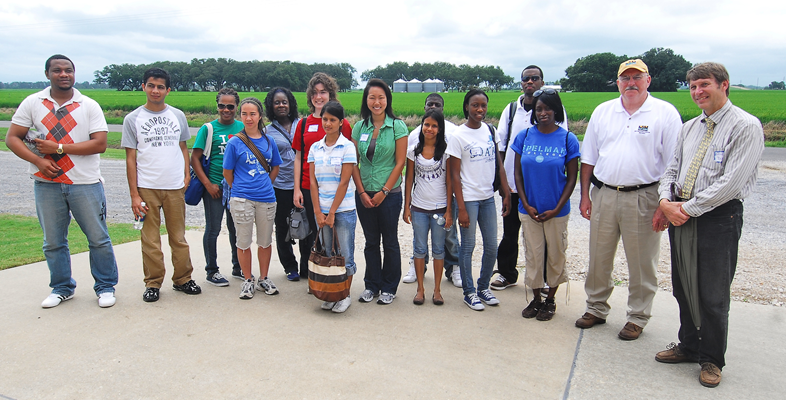 CROWLEY, La. – Among the 400 who attended a recent LSU AgCenter Rice Research Station field day was a group of 13 undergraduate minority students from universities across the United States working this summer as researchers at Louisiana State University.

They are among 70 students participating in LSU’s Summer Research Program, funded by grants from the National Institutes of Health, the National Science Foundation and the Howard Hughes Medical Institute.

Randy Duran, director of the LSU Office of Undergraduate Research, said the program’s mission is to interest minority students in making a career of scientific research. Duran, who came to LSU from the University of Florida in 2009, is principal investigator for the new $1.4 million Hughes science education grant.

“We want to increase the diversity of students doing world-class research at LSU,” Duran explained.

During the field day, students learned about the extensive research being conducted at the Rice Research Station, Duran said.

At the field day, the students were fascinated to learn that rice and crawfish are produced in the same fields, he said. In addition, the field day gave them the first chance to see tissue culture technology used at the Rice Research Station to produce rice plants from single cells in the laboratory. They also learned about work to develop diverse germplasm of coastal plants that could be used to rebuild marshes damaged by the BP oil spill.

Duran said a Nepalese student enrolled at Nicholls State University attended the field day and recalled that her grandfather grew rice to support her family.

“She was surprised at how short the rice is at the station,” Duran said.

The summer research program could provide students to work at research facilities, and those same students could then work overseas the next summer in a field related to their work in the previous year.

Duran said the desired outcome is that these students would eventually enroll at LSU for graduate studies and work as research associates.

David Boethel, LSU AgCenter vice chancellor for research, said he was struck by the students' enthusiasm, and he sees several program benefits that could benefit the LSU AgCenter.

"Perhaps this will influence minority students to consider LSU for continuing their studies at the graduate level," Boethel said. "It may be possible they could work on research under the mentorship of an AgCenter faculty member."

Steve Linscombe, director of the LSU AgCenter Rice Research Station, said the students showed a keen interest in the work being done at the station.

“These young adults were very curious about the different projects at the station, and they asked a number of questions about our work,” Linscombe said.