Chefs pose for a picture with rice breeders Xueyan Sha, far left, and Steve Linscombe, center, at the LSU AgCenter Rice Research Station Field Day on July 1. Sha developed the Jazzman aromatic rice variety being marketed by a New Orleans company, Jazzmen Rice, and the company brought area chefs to the field day to see where the rice originated. (Photo by Bruce Schultz) 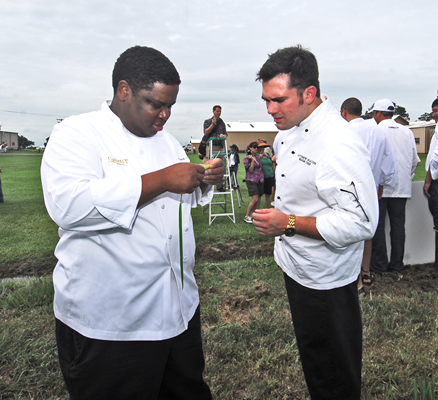 Chefs Jared Rising and Matthew Beaudin, both of L’auberge Casino in Lake Charles, examine a rice plant at the LSU AgCenter Rice Research Station Field Day on July 1. They were among a group of chefs brought to the event by Jazzmen Rice, a New Orleans company that markets the Jazzman variety developed at the Rice Research Station. (Photo by Bruce Schultz)

CROWLEY, La. – The company marketing Jazzman rice, developed by the LSU AgCenter, brought a group of Louisiana chefs to the July 1 field day at the Rice Research Station here.

Lamar Berry, Jazzman public relations consultant, said the outing was a chance to familiarize the chefs with rice farming.

“They serve our product in their restaurants, and we want to bring them out to see where Jazzman was developed,” Berry said. “Chefs tend to want to get out there and learn about these things.”

L’auberge Casino in Lake Charles chef Matthew Beaudin, originally from Virginia, said it was the first time he had seen rice growing.

Chin said sales of the company’s product are increasing, and several grocery stores have it on their shelves, including Rouse’s, Winn-Dixie, Associated Foods and Brookshires, in addition to a California Asian supermarket.

This fall, he said, the company will start selling brown Jazzman. “It’s going to have a good aroma, and it will be much better than regular brown rice.”

He said restaurants are already eager to try the brown rice.

In addition, a potential new variety of aromatic rice is under development by Xueyan Sha, LSU AgCenter rice breeder, and it has stronger aroma than Jazzman. Sha said the chemical that results in the aromatic quality is three times stronger in the line being developed compared to Jazzman.