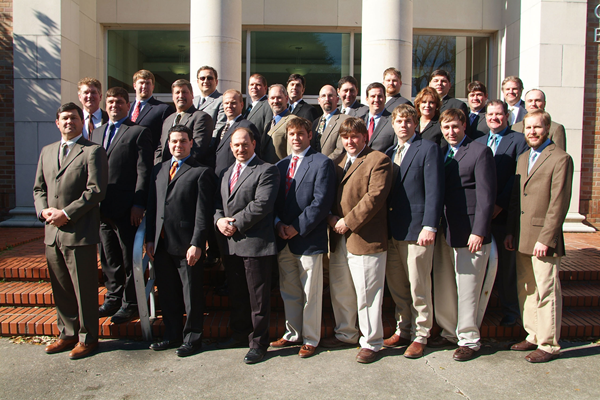 Twenty-five men and women from across Louisiana began a two-year venture in the LSU AgCenter’s Agricultural Leadership Development Program when they attended their first class Jan. 5-7, 2010 in Baton Rouge.

Twenty-five men and women from across Louisiana began a two-year venture in the LSU AgCenter’s Agricultural Leadership Development Program when they attended their first class last week (Jan. 5-7) in Baton Rouge.

“We believe investing in people is the way to ensure a vibrant future for agriculture and for the state,” said LSU AgCenter Chancellor Bill Richardson. “Our alumni from this program have gone on to become state leaders.”

Established in 1988, the Ag Leadership Program provides educational opportunities for potential leaders involved with agriculture and agribusiness in Louisiana, according to Dr. Bobby Soileau, who serves as the program’s director for the LSU AgCenter. Since its inception, more than 325 people have completed the program.

“This is our 12th group,” Soileau said of the class that began in January. “The curriculum includes 10 seminars during two years of study – seven on the LSU campus in Baton Rouge and three educational trips to other locations.”

The first educational trip and seminar is to Washington, D.C., to meet with the country’s leaders in agricultural policy. Another trip to the central coast of California offers class members an opportunity to learn about environmental and land use policies that have an effect on agriculture. The final seminar is an international study tour during which the group learns how agricultural, economic and social systems work in another country.

“The international study tour is a great opportunity for class members to learn about another culture. They visit with farmers, government officials, agribusiness professionals and the citizens of another country,” Soileau said. “In the past we have taken our classes to Europe, South America and Asia, including China.”

The program is funded through private donations and endowments from the Chalkey family of Lake Charles, Dr. H. Rouse Caffey, Ag Leaders of Louisiana and the Dr. Robert R. Soileau Scholarship. The Louisiana Farm Bureau Federation also contributes to each class. Participation in the program is based on a competitive application and interview process, and those accepted into the program pay a nominal fee.

Members of Class 12 in the program include people in farming, ranching, forestry, wildlife and agribusiness. Their names and hometowns are: