So far sweet potato outlook much better than past 2 years 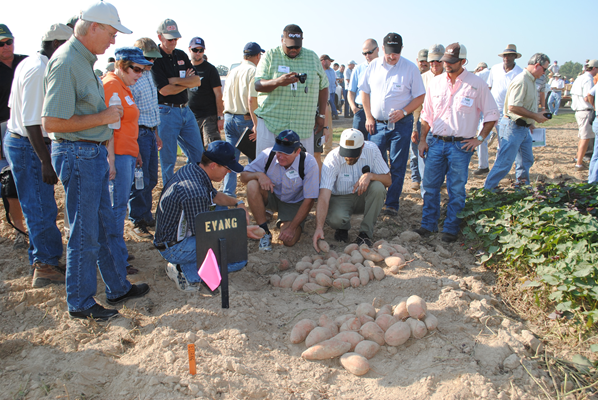 Participants at the field day gather round the samples of sweet potatoes, including Evangeline. (Photo by Mary Ann Van Osdell) 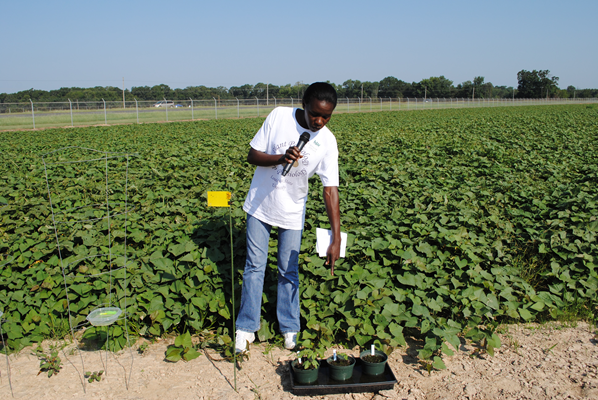 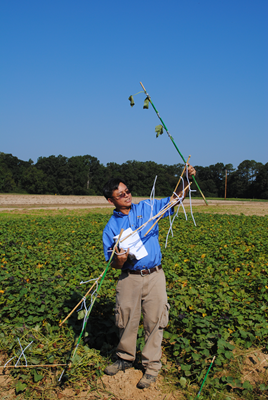 Horticulturist Arthur Villordon is testing conditions that can be controlled for maximum yield in sweet potatoes. (Photo by Mary Ann Van Osdell) 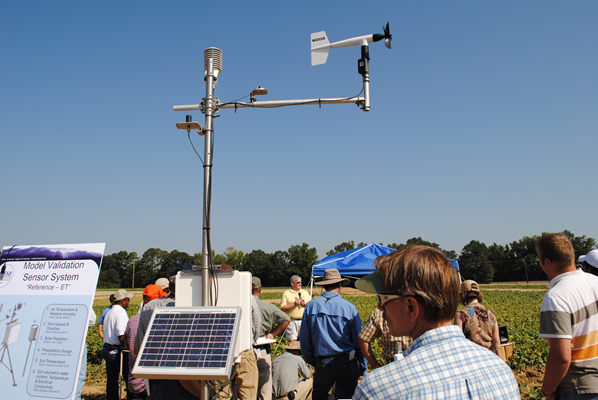 CHASE, La. – With sweet potato consumption rising and a shift in the industry toward more processed products, the LSU AgCenter’s Sweet Potato Research Station showed growers how to optimize production at a field day held at the station Aug. 24.

The latest research was presented to help growers learn how to produce a high-yielding, predictable, profitable crop.

Don La Bonte, LSU AgCenter sweet potato breeder, said one of the goals in his breeding program is to develop a tougher-skinned sweet potato. These potatoes will be more suited to the processing industry, where sweet potatoes are subjected to more handling than in the fresh market.

He is developing a prototype model to represent the relationship between fresh market yield and some agroclimatic variables known to influence storage root initiation in sweet potatoes. It is a tool similar to one developed by NASA to assist engineers in the interpretation of telemetry from the space shuttle, he said.

Everlyn Wosula, LSU AgCenter graduate student in plant pathology, told producers she is trapping aphids that spread viruses and monitoring the aphid populations. She said the AgCenter is conducting research to minimize the spread of viruses in sweet potato production.

Rick Story, LSU AgCenter entomologist, said he is testing insecticide options for sweet potatoes to determine which are best for Louisiana conditions.

“Twenty-five insecticides are currently available,” he said. “Ten years ago there were only six.”

Reniform nematodes are the dominant nematode in sweet potatoes in Louisiana, said Tara Smith, LSU AgCenter sweet potato specialist. “We are looking at labeled nematicides to compare yield and quality.”

Smith said she is also testing row spacing and plant spacing and their relationship to the nematode management strategies for the crop.

Part of her evaluation will be conducted at the sweet potato farm of Ken Thornhill, which is near Chase.

Thornhill said this year looks to be much better than the past two for sweet potato production.

“May was a fair month, but after June 10, it’s been hot and dry,” Thornhill said. He installed irrigation on his farm years ago, and it has paid off, he said.

“Moisture is critical to grow roots,” he said.

Kurt Guidry, LSU AgCenter economist, said 2008 and 2009 were two of the worst years for sweet potato production because of too much moisture at the wrong times. Two hurricanes in September of 2008 devastated the sweet potato harvest as did excessive rain during the harvest of 2009.

More than 150 producers, processors and agri-chemical company representatives attended the field day. Participants came from other states including Arkansas, California, Mississippi, North Carolina and North Dakota. They also came from other countries including the Dominican Republic and Australia.

“We had eight visitors from Australia this year,” said Smith, who is the coordinator at the Sweet Potato Research Station in Chase and chief organizer of the field day.

Some of the visitors came the day before to attend tours at the new Lamb Weston sweet potato processing plant, which is being built in Delhi. A company spokesperson said the plant should begin operation in September, and a grand opening is tentatively scheduled for Nov. 5-6. The public will be invited.