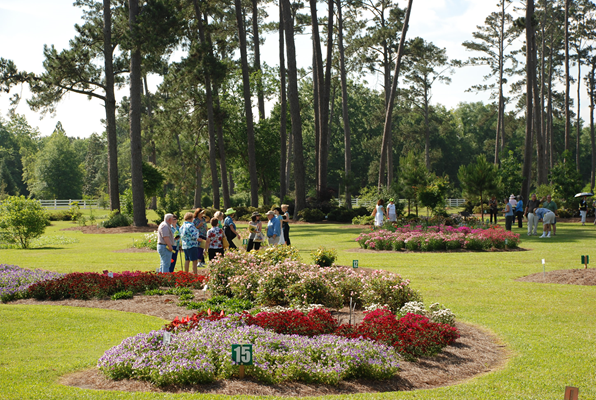 Master Gardeners tour the gardens at the LSU AgCenter’s Hammond Research Station during a stroll event earlier this summer. The plants in the different plots are actual research projects. (Photo by Regina Bracy. Click on image for downloadable photo.) 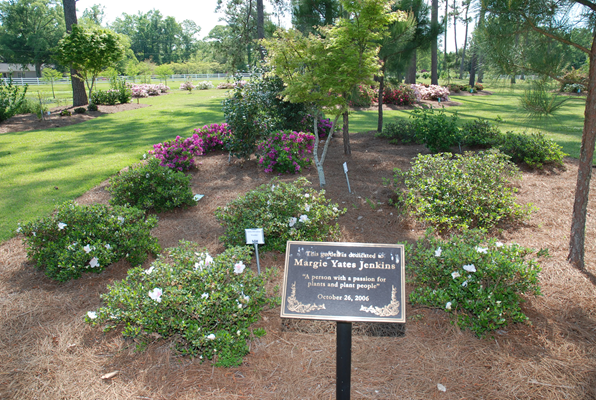 The Margie Jenkins Azalea Garden is one of the main features at the LSU AgCenter’s Hammond Research Station. The first azaleas were planted in 2006 in honor of Jenkins’ work in the nursery and landscape industry. (Photo by Johnny Morgan. Click on image for downloadable photo.)

Visitors are coming from a multi-state area, some from as far away as Florida, to inquire about the various projects at the station, Bracy said. The areas where plants are evaluated are laid out to look more like gardens than research projects.

After visiting other southern state’s research stations, Bracy and others agree the Hammond station is most like an actual garden. “We conduct plant evaluations in several gardens including some exposed to sun, others in shade, the Margie Jenkins Azalea Gardens and an urban forest,” she said.

At a recent field day, George Hackney, president of Hackney Nursery in Quincy, Fla., stopped to see the research at the station. He came back later with his sales team from Louisiana and Florida to discuss research results and to tour the station’s garden trials.

“He also told Gary Knox at the University of Florida about our program,” Bracy said. “Knox has made trips to the station with volunteers to see firsthand the work that’s being done here.”

Knox, a professor of environmental horticulture, said he is interested in setting up a program similar to the Hammond Station at the North Florida Research and Education Center in Quincy.

“We have very similar type stations and similar goals,” Knox said. “We want to display traditional and new plants and showcase the best of existing plants.”

After seeing what they have in other southern states, its evident the setup in Hammond is unique said Allen Owings, LSU AgCenter horticulturist at the station.

“Tour groups enjoy the garden layout much more than the ‘bedding plants in rows’ technique seen at other trial locations,” Owings said.

The Hammond garden was designed by Dr. Neil Odenwald, Louisiana State University professor emeritus and co-author of “Identification, Selection and Use of Southern Plants for Landscape Design.”

“He laid out beds that curled and curved and envisioned walkways, water features and resting areas,” Bracy said of Odenwald’s design. “We wanted to duplicate the growing conditions experienced by homeowners and landscape professionals in their landscapes.”

A special garden at the station is the Margie Jenkins Azalea Garden. In September 2006, the first azaleas planted in the garden were Robin Hill varieties selected by Margie Jenkins, for whom the garden is named.

“Also included in this first planting were 23 cultivars of Robert ‘Buddy’ Lee’s Encore azaleas. Later the Crimson azaleas – Majesty, Queen and Princess – developed by another Louisianian, Richard Odom, of Country Pines Nursery, were added to the garden. The size of the garden was doubled in 2007 with the addition of Southern Indian azaleas,” Bracy said.

The urban forest at the station has 32 species of trees that were planted after Hurricane Katrina.

“We planted them with adequate space between them because we want people to see the growth patterns and decide whether it will fit into their landscape plans,” Bracy said.

“People are interested in the type of evaluation and research work we do here, and they want to see it first-hand,” he said.

For more information on the landscape horticulture research at the LSU AgCenter’s Hammond Research Station, contact the station, at 985-543-4125 or visit online at www.lsuagcenter.com/Hammond.