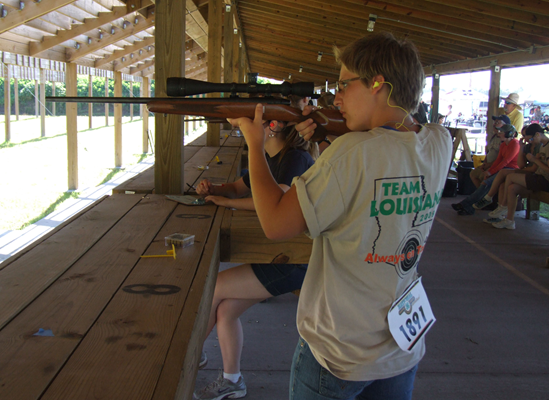 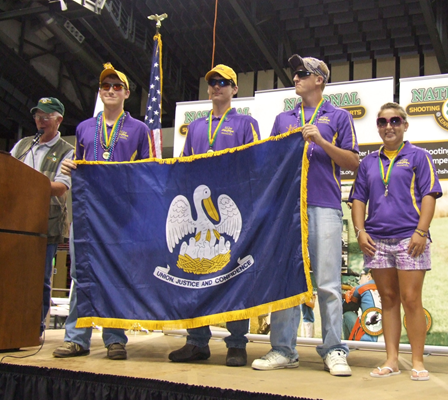 GRAND ISLAND, Neb. – Thirty LSU AgCenter 4-H’ers gave it their best shot at the National 4-H Shooting Sports Invitational, placing in the top five in three competitions and having eight individuals in the top 10.

Hunting skills team members and their parishes are Josh Barrett of Bossier, Joey Bell of Sabine, Carlin Ledoux of Beauregard and Mark Touchton of DeSoto.

Ashley Ford of Sabine Parish, a member of the rifle team, has no problem fitting in as a female, said her father, Robert Ford. “She’ll just push the boys out of the way,” he said.

Logan Clark also is a female on the pistol team. “If she gets in a situation, she will hit her target,” said her mother, DeeVonia Clark. “She’ll be in college in a year, and I have no worries. Logan is familiar with firearms.”

“The shooting sports program is an excellent tool in teaching safe gun handling skills and habits. As the children accumulate the required hours to compete, you can see safety becoming second nature,” Robert Ford said.

Sandie Boes of Texas said the event is “not always about excelling in the competition.” She complimented the Louisiana team for sportsmanship. “They offered to help our girls study. That exhibits the good character of 4-H.”

Another big event between Louisiana and Texas had taken place the day before the shooting invitational – the College World Series in Omaha, east of Grand Island. Louisiana’s 4-H team attended the second game. LSU lost that night, but Justin Trahan said, “I know we want to beat Texas in the pistol competition tomorrow!”

When the shotgun team took first the night after LSU’s baseball victory over Texas, announcer Steven Pritchard said, “Do they share their coaches on this event with the LSU baseball team? I want to know.”

Bob Woods, who was one of eight volunteer Louisiana coaches, was in the 1960 Olympics pistol trials while serving in the Army. “I like helping the young men and women. I couldn’t be happier for them,” he said.

“I could not say anything about 4-H shooting sports without mentioning the leaders and volunteers that make it possible,” said David Jenkins, one of the parents on the trip.

“For the national shooting event this year in Nebraska, I know of two gentlemen that gave up an entire week of their own free time to travel with the team and coach for the matches. These coaches do not have youth on the trip, but they still gave of their time and talents to help youth grow and develop. These are just two stories of hundreds in which folks give unselfishly to expand this sport and help youth grow into responsible and confident adults,” Jenkins said.

The competition began with teams entering the Heartland Events Center with a parade of states. Louisiana threw Mardi Gras beads and wore purple and gold shirts.

Grand Island Mayor Margaret Hornady said the competition is “one of the most exciting and fun events we have in Grand Island.”

Hornady said the public shooting park was created 10 years ago. “We went out on a limb with a sport that is not as popular as basketball.”

“The shooting sport program has an added benefit in that it not only teaches the same things as any other sport, such as discipline, self-control and sportsmanship, but the kids are instructed in safe handling of guns both on and off the range,” said parent Carol Garcie of Quitman, there with son Nicholas. “This can be a valuable asset throughout life, both for the kids and the community.”

At the event’s conclusion, Hornady told the assembly, “Your being here fulfills the dream of what a public shooting park can be.”