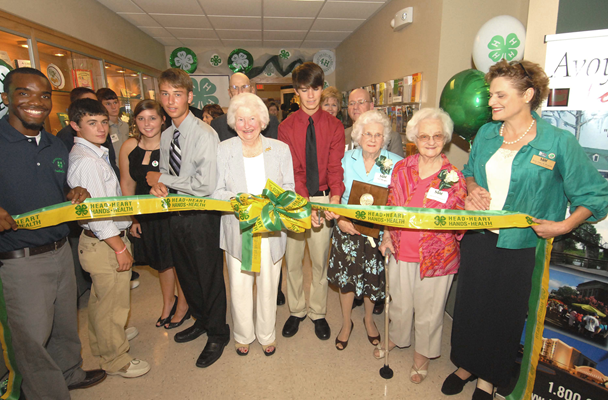 Rose Anne St. Romain, director of the Louisiana 4-H Museum, far right, holds a ribbon to be cut Saturday (July 18) at the formal opening of the museum in Mansura. 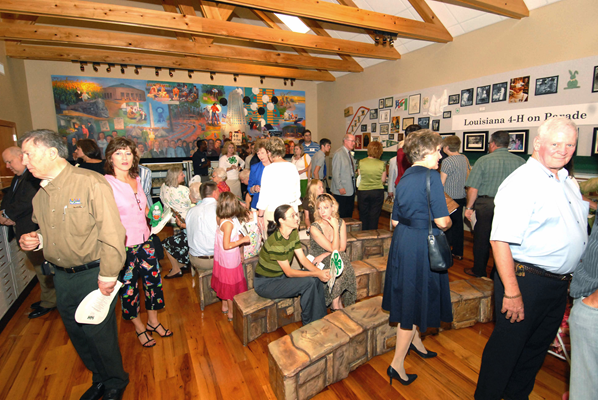 Visitors to the Louisiana 4-H Museum in Mansura view the exhibits that chronicle a century of the 4-H organization in the state. The museum is located in Avoyelles Parish where 4-H had its start in Louisiana in 1908.

More than 300 people crowded into the building that also houses the extension offices of the LSU AgCenter and Southern University Ag Center and the Avoyelles Commission of Tourism.

Museums often show the past, but this one displays the past, present and future, said Dr. Bill Richardson, LSU AgCenter chancellor.

“This museum is our dedication to the future,” he said.

Despite budget cuts, Richardson said, 4-H will be a priority.

“We’re going to continue to make sure we have a strong 4-H program in this state,” the LSU AgCenter chancellor said.

The museum is a testimony to the effect 4-H has on people’s lives, said Dr. Paul Coreil, LSU AgCenter vice chancellor.

“This is a showcase for demonstrating how 4-H has provided an opportunity for youth to excel and develop into young adults,” Coreil said.

“This museum documents that though the programs have changed over the years, what has remained consistent is the commitment to the child,” St. Romain said. “Behind every one of those items there is an experience, and those experiences are what collectively changed people.”

The Hall of Fame area features a touch-sensitive screen with information and photos about individuals who have been selected into the hall. A digital presentation features the museum’s mascot, called “Frankie the 4-H Fox,” and the LSU AgCenter’s Character Critters, a set of cartoon characters who tell stories about character education.

The museum also features a three-dimensional miniature parade of 4-H projects and programs, a mural highlighting milestones in Louisiana 4-H and an entire wall dedicated to parish 4-H exhibits.

Many of the items on display have been donated or loaned to the museum as a result of a statewide request in a “scavenger hunt” for documents and memorabilia.

Joanne Bolding, a former 4-H’er and former volunteer leader from Oak Grove, is among those who donated items to the museum. She was inducted into the 4-H Hall of Fame in 2008.

She contributed her children’s record books that won national awards. Bolding said looking at the displays brought back a flood of memories.

“I see a lot of things that are very close to my heart,” Bolding said. “It’s good to have a place to come to see the past as well as the future.”

St. Romain said the museum’s displays will undergo continuous changes to show developments in new 4-H programs and to celebrate accomplishments of 4-H Clubs in the state. Some items are not ready to be shown, she said.

“We have many items that cannot be displayed yet because they are undergoing conservation measures to preserve them and to protect them from deterioration,” the museum director said.

Louisiana 4-H has its roots in Avoyelles Parish.

Within a few years, more agricultural project clubs for boys had formed, and clubs for girls were also under way. Such boys and girls clubs being organized nationwide eventually were collectively called 4-H Clubs. Today, the clubs offer much more than agriculture, with programs ranging from health and fitness to science, engineering and technology.