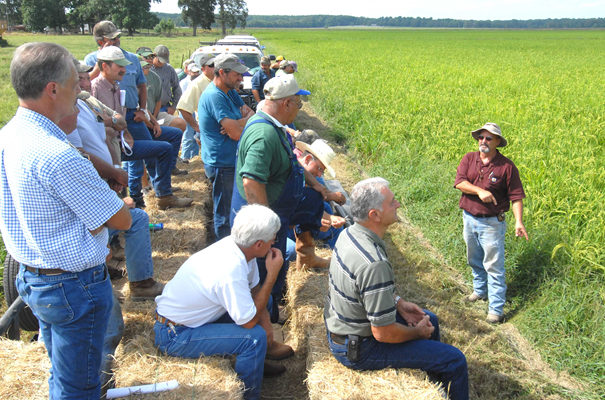 Farmer Kenneth LaHaye of Evangeline Parish talks about using no-till methods on his rice fields during an LSU AgCenter Master Farmer field day July 14. LaHaye’s farm is one of 12 Model Farms in Louisiana.

VILLE PLATTE – The addition of lime to neutralize soil acidity may be required on pastures before grazing forage will be able to benefit from fertilizer, according to LSU AgCenter soil scientist J Stevens.

Stevens told participants at a Master Farmer Field Day July 14 that many soils developed on the silt and silt loam deposits may have lower soil pH levels that can be increased with lime.

Nutrients from fertilizer will not be as readily available to plants in soil with lower soil pH levels, he said. Soil where grass forages are grown should have a pH level of 5.5 or higher.

“Legumes would perform better if the soil pH was in the range of 6 to 6.5,” Stevens said.

The Master Farmer Field Day was held at the farm of Kenneth LaHaye of Vidrine. LaHaye has 340 acres of rice and 80 acres of pasture.

Donna Morgan, assistant area agent for the LSU AgCenter Master Farmer Program, said LaHaye’s operation was one of 12 chosen as a model farm in Louisiana.

“He has been dedicated to conservation for several years, especially in the areas of no-till and precision land grading,” she said.

LaHaye said he prefers no-till farming, and some of his fields have gone several years without plowing.

“I have not seen any yield drag at all,” he said.

Dr. Ron Sheffield, LSU AgCenter water resources engineer, told farmers they should consider electric motors to run their irrigation wells instead of diesel engines. A 50 percent savings on operating expense can be realized from the conversion, he said.

Electric rates are expected to increase, but not at the rate that diesel prices are projected to rise, Sheffield said.

Products that sterilize fire ant nests are effective on pastures and yards, said Dr. Dale Pollet, LSU AgCenter entomologist. The products for pasture treatment, called Esteem and Extinguish, are effective at the rate of 1 to 1.5 pounds per acre, he said, and October and April are the best months to apply the material.