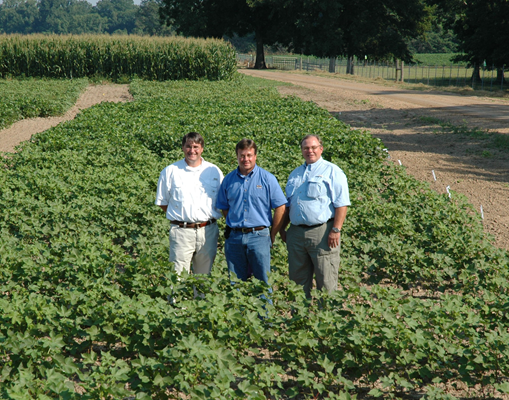 Daniel Stephenson, left, Donnie Miller, center, and Jim Griffin are three of the LSU AgCenter weed scientists who addressed the farmers gathered at the field day on how to tackle weed problems. (Photo by Linda Foster Benedict) 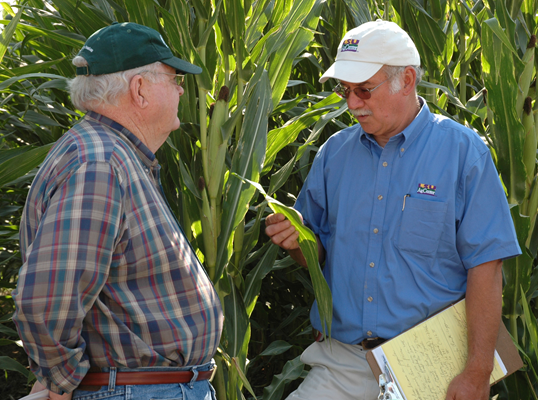 Rick Mascagni, right, a researcher at the Northeast Research Station, talks with one of the participants at the June 24 field day, Frank Phelps from Morehouse Parish. (Photo by Linda Foster Benedict) (Click on photo to download larger image.) 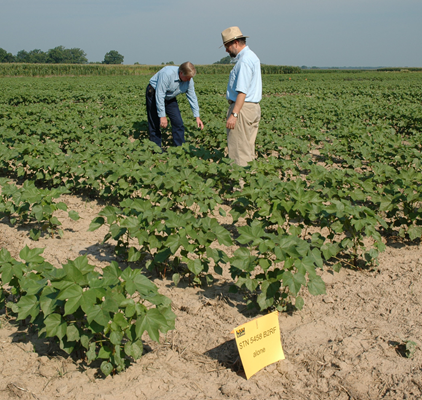 A “gorilla” of a barnyardgrass and a “tough critter” nematode are two of the problems being tackled by LSU AgCenter researchers as reported at a recent field day at the Northeast Research Station in St. Joseph.

Dr. Daniel Stephenson, LSU AgCenter weed scientist, told farmers at the June 24 event that barnyardgrass “is setting up shop” in the neighboring area of the station, and glyphosate, the chief herbicide used to control it, may no longer be working.

“We need to switch modes of action for control of these weeds,” he said. “We need to get residual herbicides out there to control these weeds.”

He told farmers if their weeds are not dying, they need to contact someone in the AgCenter to help determine if the problem is with application procedure or resistance.

Dr. Charles Overstreet, LSU AgCenter extension nematologist, said the reniform nematode is becoming more widespread and causing lots of problems. This “tough critter” can survive in soil a long time and without a host.

Overstreet suggested treating zones or areas in a field that have extremely high levels of reniform nematodes with one nematicide (a fumigant) and treat lightly infested areas with another (seed treatment or at-planting nematicide).

“Nationwide, we lose $100 million a year to reniform nematode. This is a not a lightweight issue,” he said. “It’s not likely that you will ever eliminate it. All you can do is manage it. Don’t let it be a big factor hurting you on yield."

“It is the predominate species out there,” he said, adding that Arkansas and Texas are also seeing more of the pest.

Davis said scientists will be able to tell growers the appropriate applications in the future so they will only have to spray that section of the field affected by the bug and not kill beneficial insects.

No new pesticides are predicted in the foreseeable future, so resistance is an issue.

“We are using insecticides that are my age and older. We can’t stay on the current path and grow cotton in this state,” Bagwell said. “We have no new solutions so we have to do what we’re doing better.”

Those include studying border interactions and plant height in managing bugs.

There will always be issues and problems with field borders, Bagwell said. He suggests concentrating cotton acreage in contiguous blocks to reduce borders with other crops and non-crop areas.

Many plants serve as hosts for cotton pests. Pest populations will often build to high levels on these hosts and then move into cotton as the host plant matures. Reducing the amount of borders between cotton fields and alternative plant bug hosts will help to reduce the number of insecticide applications required for pest control, Bagwell said.

Another way to reduce the cost of raising cotton is to use aircraft equipped with GPS guidance systems and flow-rate controls, Bagwell said. Aircraft ground speed can vary as much as 25 percent during an application. A flow-rate controller varies the aircraft’s output flow rates so the applied insecticide rates are similar regardless of ground speed.

Dr. Bob Hutchinson, regional director of the LSU AgCenter, said the mission of the station hasn’t changed much since its establishment in 1929. The research conducted serves the agriculture industry in Northeast Louisiana.

Hutchinson said the station has an excellent relationship with producers, crop consultants and agribusinesses and “outstanding collaboration between scientists at other LSU AgCenter research stations.”